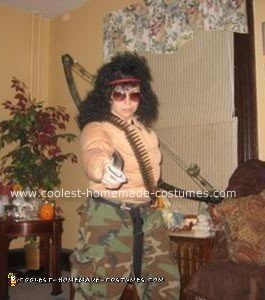 I made a Homemade Rambo Costume, not a Mexican refugee as some may perceive at first glance! I happen to be a fan of weapons and of Rambo, so…walla! A great costume idea.

I got together various items that one would relate to our famous friend. I began with muscles (fake cotton ones of course), black hair, infamous red cloth head band ripped from his lovers dress or whatever it was, a cross bow, a RAMBO knife (everyone refers to it as a Rambo knife too!) and something CAMOUFLAGE! The only thing missing was a green jade stone necklace, damn it!

I am a female and don’t normally resemble a man or ‘Sylvester’ so I had to add the shades, oh and fake bullets because I don’t have a real bullet belt handy. His movies molded who I am today (not really, but they were awesome!) and wanted to bring him back because some people have seemed to have forgotten our on-screen heroes.

So, come Halloween 2007 I left work early enough (like normal time) to rush home, push grandma out of the way and get to the ultimate funny- slash-character costume ever. I ripped off my uniform, looked in the mirror and talked negative about my body to myself in my head for a few minutes, then snapped out of it and got serious. This was the night! The night everyone in Mayfair would laugh endlessly at my glorious idea of funny.

Then as a bowed down my head and tied the last piece around it and then looked up in the mirror at myself, I realized, where are my sunglasses? I screamed and went crazy looking for the damn things. BUT THEN, as I looked in the mirror again and placed the shades on my face and held that knife on my waist, I knew right there that I looked like a total asshole. This was my goal? Yes, this is what the people want. This is how people will like me.

The laughter went on through the night, as so did the DUMB questions but everyone remembered their fake hero! He is not forgotten! Seriously though, hope you like it! It was fun! Thank you.

A Cheap, Effective and Damn Scary Regan from the Exorcist Costume