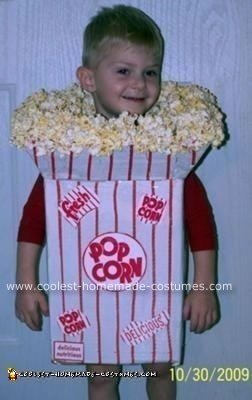 This is a homemade Popcorn Box Halloween costume that I, Rebecca, put together for my 3 year old boy Brandon.

I started out not knowing what to do but absolutely refusing to buy Halloween outfits as it takes the fun out of the event. I started with a $0.79 box of popcorn, went home and announced that I was going to make my son a popcorn box! I sat down on the kitchen floor with tape, popcorn, a couple of boxes and a big red marker.

I started to cut the box which was an old diaper box. Brandon thought it was fun to play in the box. I marked where his arms were, cut little holes for him and opened up part of the top for his head. After that, I glued wrapping paper backwards to give the white look. I then striped it with red marker. The top, where it is cropped out, is actually the end of the box cut in half and shaped to make the bulging out look. I then hot-glued each individual popcorn kernel, (real popcorn kernels), to the top; there were lots of kernels and I wanted it to look as if they were spilling out of the popcorn box.

We had a great time making the costume and wearing it was the best for my 3 year old. He was a big hit and everyone wanted to eat him up!