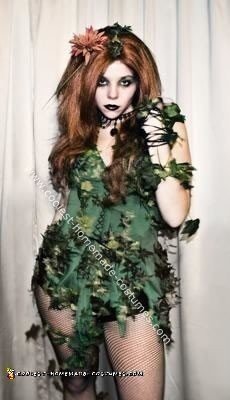 Hollywood ain’t got nothing’ on me! Just kidding. I made this Homemade Poison Ivy Halloween Costume because I was sick of the LAME Poison Ivy costumes I’ve seen in the stores and on the web. She’s supposed to be wicked cool, sexy and mysterious. Not, and I repeat NOT just a chick wearing green with red hair and some leaves thrown in.

How I made it:
Step 1. Find good base material. I got a generic “Eve” costume with some crappy fake leaves on it as the base for the corset dress from a very good friend of mine. I also bought: black patent spiked stiletto heels, black fishnet stockings, a sultry red wig, black laced fingerless gloves, a black necklace with a skull and crossbones on them, black ribbon, a dead looking flower, fake eyelashes, fake nails, new eyeshadow, lipstick and nail polish, and about 40 feet of ivy vines from the craft store.

Step 2. Redo basic outfit pieces to my standard. I started by changing the crappy fake leaves to more ivy appropriate ones via ripping them off the craft vines leaf by leaf and hot gluing them to the dress. After a while I thought that the dress was too “covering” so i then proceeded to shred the bottom with a box cutter and continued gluing leaves in place. I also styled the wig (which was hard since it’s fake hair) and glued some ivy leaves into the wig. I also glued leaves on the gloves and the high heels for added ivy effect.

Step 3. Put it all on. This took me about an hour and a half with all the makeup and different pieces. In the photo I’m submitting I don’t have on the eyelashes or fake nails but I have on everything else. The vines around my arms and leg were just ones I left the leaves on and just wrapped around me. They are horribly uncomfortable and I do not recommend wearing them for an extended period of time!

I hope you all enjoy my rendition of this famous lady villain. I had a blast making it; and will have a blast wearing it this year at my Halloween party!