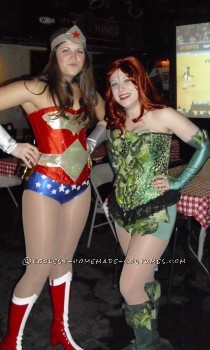 I’ve wanted to make a Poison Ivy costume now for several years, but never ended up going through with it. Until recently my boyfriend and his friends informed me they throw an annual themed Presidents’ Day Bar Crawl. The perfect excuse to a) wander around town with a huge group of friends while imbibing multiple alcohol beverages, b) make complete fools of ourselves dressed in outlandish themed costumes and most importantly c) spend many hours designing, crafting, and rocking the Perfect Costume! When my boyfriend informed me the theme was going to be “Superheroes” I was overwhelmed with excitement – finally the perfect excuse to rock the Poison Ivy look. I of course had to first get permission to go as a villain, but being the awesome boyfriend that he is, he gave me the go-ahead. So then I set out to design the costume. The whole process actually took several weeks due to all the pieces I put together, but it went a little something like this:

This process was very fun. When I purchased the gloves and shorts I bought them in white so that I could dye them to be the same color green. My theory was that if the shorts and gloves didn’t exactly match the color of the corset, they would at least match each other. This, combined with the matching leaves, would pull the whole outfit together.

Following the instructions on the RIT bottle I soaked the gloves and shorts in the dye in a small bucket. I went heavy on the amount of dye I used so that it was a deep green color. Once they dried, they were a beautiful hunter green.

Then I “dyed” my boots. I bought a pair of knee-high boots from a local consignment store that were a medium brown color. I then purchased spray paint from the craft store that said on the can it could be used on fabric. I spray painted one coat of white on the boots, followed by two coats of green. The only thing I wished I had done different was cover the zippers. They ended up being stuck together after I spray painted. I used rubbing alcohol with a q-tip along the zippers the next day and they luckily came apart.

Step Three: The MANY, MANY Leaves

I started with the gloves. This was a couple of days after I had dyed the gloves and shorts. I laid out the fake leaves on the top of the gloves and at the bottom where they would lie flat on the top of my hand. I then hot glued the leaves onto the fabric, making sure to alternate between top-up and top-down to create a light vs. dark green color pattern.

Then I followed the same process for gluing the leaves to the shorts. This was a pretty-funny process because my first pattern was a “v” on the shorts. My friend that I was crafting with (shown in the Wonder Woman costume) quickly informed me it was more than a bit inappropriate looking – although hilarious for her. I continued adding to the pattern until the shorts looked more appropriate. Side tip: I put cardboard type material inside the shorts to stretch them to about my size while I was hot-gluing.

Next I put leaves on the boots. I stuck with the alternate top-up/bottom-up leave pattern on the boots. I glued some to the flap of the boot at the knee and some closer to the bottom where they would lay flat on the top of my feet.

I saved the corset for last. For the leaves on the corset I specifically wanted a v pattern that started wide at the top and narrowed down at the bottom. I put a t-shirt on top of the corset and measured out what area I wanted to be covered in the vee. I cut half of the pattern on the t-shirt (half of a “vee”), then laid the leaves along the t-shirt in a pattern I thought pleasing. I glued the leaves all together (being very careful not to glue the leaves to the t-shirt) for one side. Then I reversed the “t-shirt template” I was using. I did the same thing for the other side. I didn’t glue the leaves to the t-shirt because I wanted them to lay directly on the corset. I didn’t glue them to the corset, because I might want to wear this snazzy-Chinese-dragon-covered-corset again some time. Instead, once the leaves were dried (almost immediately) I sewed each chunk of leaves to the appropriate side of the front of the corset, being careful to leave space for the snaps in the front of the corset.

Using the velvet fabric I had purchased – I followed a simple DIY you-tube video for the cape. It mostly consisted of folding the cape in half and then cutting a triangle out of the top corner on the not-folded side.

Step Five: Put All Together

The Poison Ivy Costume and the “Superheroes themed Presidents’ Day Bar Crawl” were both a very huge success. I saved all of my supplies and hope I get another excuse to rock this awesome costume. 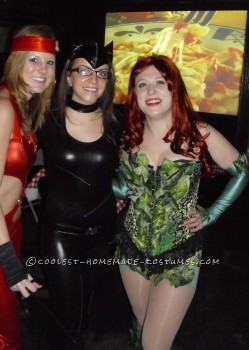 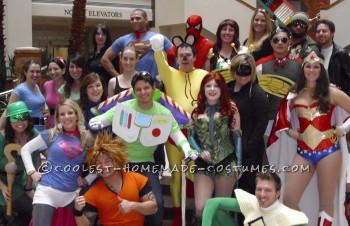 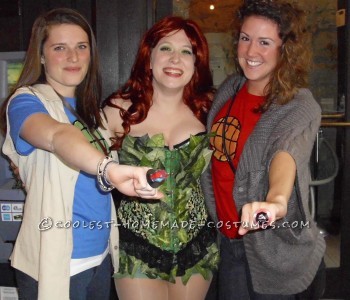