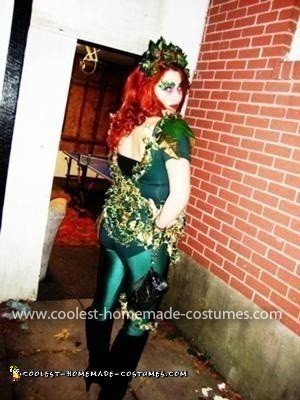 This Poison Ivy costume was actually a last minute idea. I thought of characters I could dress up as that also had intense red hair , so I thought Poison Ivy from Batman would be perfect.

I had to purchase a few things to begin with, such as:
– Green metallic leggings
– Green body suit
– Fake ivy vines and bunches
– Gold spray paint
– Green and gold glitter

I spray painted a few vines gold to give it more shine and dimension. I had to have a friend wear my bodysuit as I hand stitched the vines onto the fabric in an angled pattern, almost as if the vines were crawling up and around her body (you definitely want to have someone wear it or else when you put it on you risk ripping the material and leaves when it stretches to fit you). I stitched about 6, 5 foot long vines all around the costume, then added in some large leaves to cap off the right shoulder and around the bottom of the left hip. That gave it an asymmetrical look. I also took an old plastic headband and hot glued some red and green ivy leaves to create a head piece.

I kept my hair style the most simple. I knew I would have a big head piece so I opted for big waves using a flat iron. My make-up was the best part of the whole look. I used gold, yellow, green and bright pink shades to create the look on my eye lids, along with some pencils to make tiny “vines” above my cheek. The night before I cut out fake leaves to contour my eyebrow, covered one side with glue stick and dipped them in green glitter. I then applied glue stick and foundation to my eyebrows and let them dry (this was to ensure that my eyebrow hairs wouldn’t get ripped off later!). I used lash glue to adhere the leaves just under my brow line and also added glue above to flatten them out (should have used spirit gum, cause…taking them off was NOT fun).

I wore a bright red lipstick, which is definitely a must for this costume. Poison Ivy’s number one weapon is her kiss! To finish the look off I wore some knee high black boots I already had, stuffed a vine in the top of the boot, wrapped it up my leg and tucked it under the body suit, again to mimic climbing ivy.

This Homemade Last-Minute Poison Ivy Costume was by far the best costume I’ve ever had. I got a ton of compliments on it and I felt great in it. 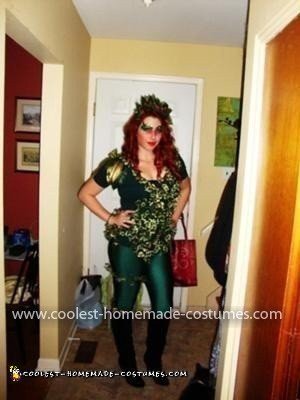 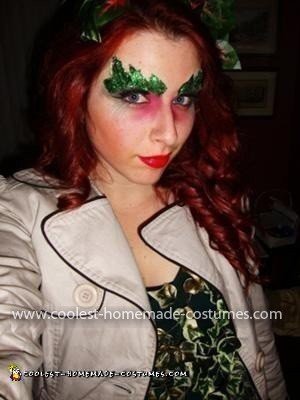