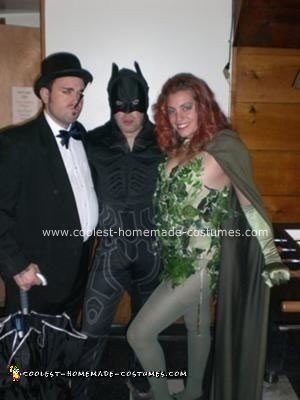 My friend was obsessed with Batman after the latest movie came out. So of course he wanted a Batman Costume and so my other friend and I obviously wanted to be his Villians. He pulled together a Penguin costume out of stuff in his closet and by stuffing his shirt with a pillow.

I made my Homemade Poison Ivy from Batman Costume by first buying a nude leotard. Then I bought a bunch of fake leaves and ivy from the arts and crafts section in Walmart. I also bought a little bit of green mesh fabric, and fabric glue. I stretched the leotard around a box so it was stretched out when I wrapped the mesh fabric around it. I used the mesh as a background for the leaves.

Then I started gluing the leaves on. I found the best method for doing this was to take the plastic parts off the leaves and using clothes pins to hold the leaves in place while the glue dried.

As for the rest of the costume, I bought white tights and gloves and clothing dye. I died them together so the green came out the same shade of green. I also bought green fabric which I simply tied around my neck as a cape.

I made my hair red simply by buying the temporary red hair spray in the costume section of Walmart. (Caution: If possible, wash your hair before you go to sleep that night! Otherwise your bed will be red!)

I was able to find everything at Walmart. I think the grand total of the costume came to about $30.
I got many compliments on my costume that night, everyone kept asking me where I bought it!