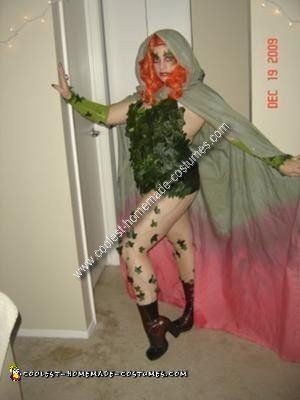 For this homemade Poison Ivy costume I used an old swim suit and glued on fake ivy leaves with a glue gun. I took nylons, put them on, then drew a line, to make the illusion of a vine going up my legs. I also glued leaves on to those. I took a white sheet and died 3/4 of it green, then I overlapped it with a little red, and the rest of the sheet was red too, for her cape. For her gloves I took kids nylons and fabric, painted them green and glued on leaves. I used fake nails and painted them an olive green.

The face is a totally separate thing. I love costumes with a lot of make up. I took a couple of leaves glued them together for the pieces over her eyes and used spirit gum to glue them to my face. I used, believe it or not, lip gloss for my eye color. Coral lipstick was used on my lips and I took a wig, painted it red and added a little vine into it. Then last but not least I put on red sparkly falsies.

There you have it… The coolest homemade Poison Ivy costume. 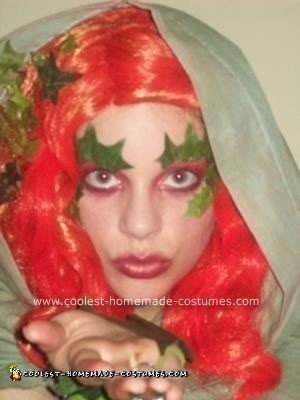