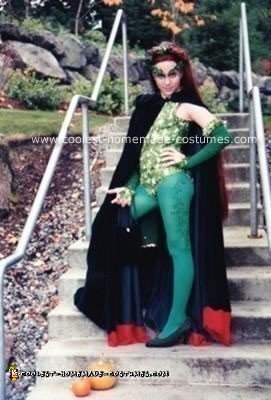 I made this homemade Poison Ivy costume for my daughter. I bought the wig, but made the twisted hair headband from a cheaper wig I cut up, twisted and attached to a wire headband. I also attached silk plant leaves to the headband.

I bought a little body suit that I glued silk plant leaves to. I had her wear it while I glued the leaves on so it would be the right shape when it dried. I made the cape from a pattern but the red part on the bottom of the cape I just sewed on… not part of the pattern.

I drew the leaves on her stockings. I glued silk leaves to her palms with spirit gum, and I made the purse (no pattern necessary for the purse).

This homemade Poison Ivy costume took me almost a year… from the point of first planning it out by watching Batman & Robin over and over and until ths costume became a finished product.

2 thoughts on “Pretty DIY Poison Ivy Costume for a Woman”