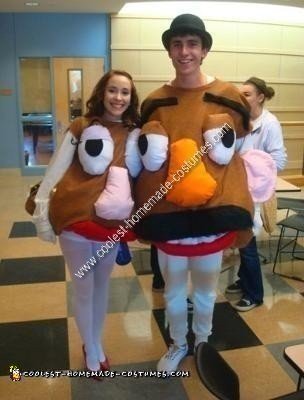 Every year at my high school we have homecoming week, which is an entire week full of spirit days. Every year we have a “class theme day”, and the senior class theme was Toy Story. My boyfriend and I decided to be creative and make our own homemade Mr. and Mrs. Potato Head couple costume, even though neither of us had any experience in sewing whatsoever.

We bought felt for the bodies, fur for the eyebrows and mustache, and a variety of fabric for the features. The first features we made were the eyes. We took a thick piece of felt for support, and glued white fabric around it to create an oval, and then we stuffed it. We glued on the eyelids and pupils after that. The ears were next and also the most challenging part. We cut out an ear shape from a piece of foam and glued fabric around the edges, carefully stuffing it to obtain the correct shape.

The noses were the most intimidating of the features to me but, surprisingly, the easiest. We used the same idea as the eyes, cutting the shape out of stiff felt and gluing the fabric around, and then stuffing it full. Since we had no idea how to use a sewing machine, we hand sewed the lips by cutting out the shape, sewing it inside out, stuffing it, and then sewing it shut. Mr. Potato Head only had a bottom lip, but for mine I made sure to sew a line between the top and bottom lips to define them. For Mr. Potato Head’s teeth, we just took white fabric, sewed it into a crescent shape and then sewed vertical lines to define the teeth.

Then we decided in order to sew the heavy felt for the bodies, we had to learn to use the dreaded sewing machine. He pulled out the old machine from his storage room and learned how to thread it, and use it all by himself. After many hours of tedious test strips to find the right stitch and thread tension, we finally figured it out. We then cut out two potato shaped pieces for both of us, with a thick straight strip at the bottom (to be used to sew onto a shirt). We sewed it inside out all along the edges. Then we took a white long sleeve shirt and sewed the bottom edge to the strips at the bottom to make a pocket in order to stuff the potatoes. We stuffed batting into the front of the potato to give it shape, and then sewed the collars of the shirt to the felt so the shirt wouldn’t slip down when we weren’t wearing the suits.

We finished the outfits off with white tights (or long johns for guys), red shoes for Mrs. Potato Head, and a hat for Mr. Potato Head.