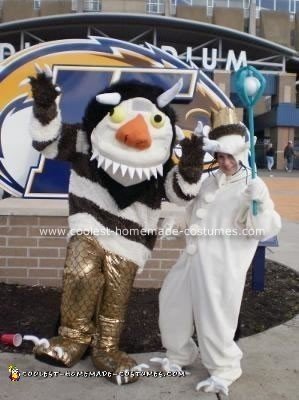 This is our Homemade Max and Where the Wild Things Are Monster Costume. The Max costume started with McCalls pattern M5956. I used soft stretchable fleece material and followed the pattern with a few modifications. The ears were made with a homemade pattern and had pipecleaners sewn to the inside to make them stand up. They were sewn to the front of the headpiece. The whiskers were also hand sew pipcleaners, 4 on each side. I put Velcro fasteners on the head piece and connected it to the front with Velcro on either side of the zipper. This prevents it from moving back.

The crown is fur and foam rubber covered in shiny gold stretch knit fabric. The hands were modified from the mitten pattern by making 3 cuts and sewing the resulting 4 “fingers” into “claws” by making each finger pointy. The 4 fake buttons are covered circles of foam.

The foot claws for Max and the Monster are made from a homemade pattern and stuffed with fiberfill and a pipecleaner to make them stay bent. The king’s septor is a section of a curtain rod covered in Teal DuckTape, some foam rubber and a Styrofoam ball.

The monster costume was harder. I covered a pair of over sized men Pluto slippers with gold stretch material. I added padding to the heal because the monster walks on his heals because the feet are so big and this helps soften the steps. The bottoms were then covered with black felt and hot glued on. The “scales” you see on the feet and pants were hand painted with fabric paint. The foot claws were then attached.

The pants were made from the gold stretch knit by tracing a pair of sweat pants for the pattern. Elastic was added to the waist but not the ankles so they could be pulled over the slippers. The pants were painted after they were sewn. Allow at least one day for the paint to dry. The tail was made and sewn on from leftover fake fur used on the mask. The legs are made “thick” by batting wrapped around the legs and taped so they can be worn before putting the pants on.

The shirt was made from stretchable fake fur by sewing alternative white and brown strips and then using a sweatshirt as a pattern, cutting the sleeves and body out of the presewn strips and sewn together to make a shirt. Binding was sewn around the neck so it wouldn’t fray. Hands were made the same was as the Max outfit but white claws were sewn on the end of each finger made the same way the foot claws are.

The mask is made from 5 sections of 1/2 inch flexible foam rubber cut from a modified pumpkin pattern I found on the internet. Sorry I can’t give specific dimensions because I just played with it until I got something that worked. I pinned the pieces together until I got the shape I wanted, then “sewed” the pieces together with pipecleaners. This worked out great because the seams were flexible and if they had to be taken apart, it was easy to do and left no holes in the foam rubber. If you draw an imaginary line through the top of the mask, 3 sections should be in the front and 2 in the back. This makes it tend to fall forward so I put the thinnest flexible rebar I could find at a hardware store arching over the top and attached it at the sides with, you guessed it, pipecleaners. Then to stabilize it, I tied 3 strips of elastic from both ends of the bar.

When worn, 2 of the straps go behind the “human” head and one under the chin. This seems to work. The entire mask was then draped with a thin stretch knit buff material and pulled tight in the front so no wrinkles or seems would show. Fiberfill was stuffed under the material to form the eye sockets and upper lip and tacked with thread to prevent the fiber from moving. The excess material was cut off and seems, raw edges and folds were hot glued.

The hair was added with pieces of fake fur. The strip was put ear to ear in a “V” and glued at the front hairline to give it dimension. 2 horns were hand sewn and stuffed and sewn to the hair (the leaning one has since been fixed). The eyes were each 1/2 of a Styrofoam ball painted yellow and then again with glow in the dark paint for an added surprise at night. The black circles are felt.

The nose is a soft sculpture sewn by hand from scrap burnt orange cotton material. Eyes and nose are hot glued on. Teeth are made from poster board cut and glued into 3 dimensional triangles and glued on.

This Homemade Max and Where the Wild Things Are Monster Costume was a lot of work and not for the faint of heart, but I am glad I did it and glad to share my experience.