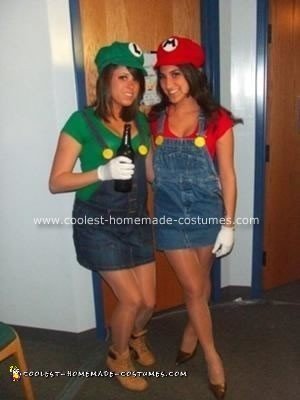 We are both named Amanda and we are roommates in college. We wanted to have a theme for a costume. Since we are in college we did this Homemade Mario and Luigi Couple Costume with NO Money!

Our Green and Red shirts were bought from Forever 21 at store in our local mall. Checkered hats bought at PayLess were spray painted white first since it was so hard to cover. Then spray-painted over and over again Green and Red. We added felt to the hats. Since they were sprayed so many times, it was like a rock hard and stuck easily, with hot glue.

We went to Goodwill and found an overall dress perfect for one costume and a baby overall for the other costume which we had to cut open and sew into a skirt. We added yellow felt to the front of the overalls to look like the buttons.
White gloves we bought at the store.