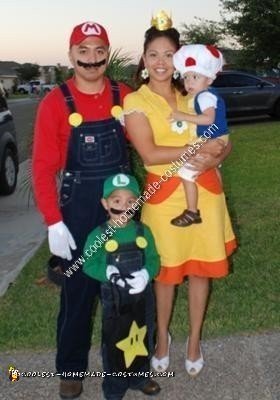 So this yr we decided to dress up as Super Mario Bros characters, since my 4yr old son wanted to be Luigi. Dad was Mario, baby brother was Toad and I was Princess Daisy.

For the Mario and Luigi, I simply purchases overalls with red and green long sleeve shirts. I found 80% of the clothing articles at a thrift store. I added yellow buttons to the overalls, which were made from felt and attached with a glue gun.

For the hats, I purchased 2 solid colored caps from a sporting good store and added the white circle and coordinating letter w/felt and attached with the glue gun. The mustaches were cut out from a large 8×10 felt material that had adhesive on the back side, which I purchased at Michaels. They also wore simple white knit gloves I purchased for a $1 each!

For the toad costume, I cut up an old blue shirt right down the middle and removed about 2 in of width. I used fabric adhesive to glue the ribbon along the edge of the shirt. For the hat, I purchased a ½ yd of white felt. I cut out a huge circle and sewed about an inch around the edge of the circle. I then put an elastic band the size of my baby’s head thru the edge and sewed the elastic to the edge. I simply added red circles cut from felt and attached them with the glue gun. Lastly, I stuffed the mushroom head with poly-fill to help hold the shape. To finish up the look, he wore a white onesie, white shorts and brown sandals.

The hardest costume was by far Princess Daisy! I had been looking several weeks for a yellow dress with no luck. So the week before, I purchased a white shirt and a white skirt and dyed them yellow using a box of Rit. After the shirt was completely dyed, washed and dried, I added some lace around the arm cuffs. I then purchased a yd of orange fabric and added the trim around the bottom of the skirt and the 2 half circles at the waist.

For the flower on the shirt, the earrings and the crown, I used foam sheets. For the flower on the shirt, I cut out a large flower and added a large green jewel I found at a craft store. For the earrings the same, except I added a smaller jewel and glued the foam flower to some existing earrings. I was lucky enough to find a gold foam sheet that was completely covered on one side with gold glitter at Hobby Lobby. I shaped the foam sheet into a cylinder and cut triangles off the top to form the points. I added smaller flowers on one side and also added more jewels to finish the look. I then used the glue gun to adhere the crown to an existing headband. I had also purchased white gloves and added lace to them, but I didn’t wear them in the photo. 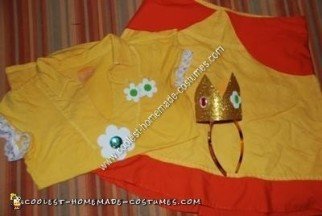 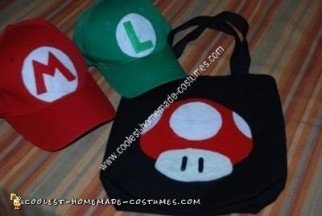