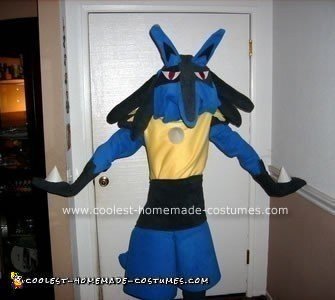 My Dad helped me make the coolest costume ever, a Pokemon costume. Which one, you ask? A big, bad, blue Lucario, of course!

To make this costume, we basically copied the instructions from Riva F.’s costume on this site, with a few exceptions. Instead of putting 1/2 inch thick foam inside the tail, we put pillow stuffing inside it so we could have a 3-d tail instead of a 2-d tail.

Our biggest challenge was that we didn’t know where she put eye holes, so we cut eye holes on the bottom of the neck.

It was a lot of work to make it, but it turned out so cool in the end! I would never have done it without him!

Extra thanks to Riva F. who inspired us all!