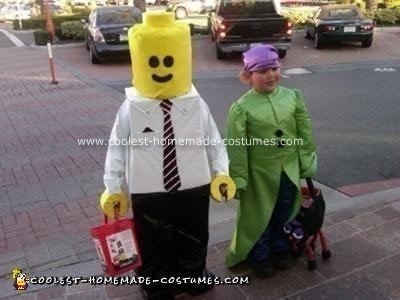 My eight year old son, Julian, has wanted to be a Lego minifig man for a long time and I finally decided to make his Homemade Lego Minifig Halloween Costume. It took me approximately a little over 3 weeks to make.

For the head, I constructed the shape using chicken wire. I placed a quilt covering around it so it would be soft enough for him to place his head in it. My first choice was to use yellow tape to cover the head to give it a plastic look, but I realized that he would probably not be able to breathe very well. So I used a bright yellow fabric, similar to tafetta, which almost had a shiny glare to it.

To construct the eyes was difficult for me. I cut out the eyes and mouth, then I placed a dark mesh fabric cover so that he was able to see and breathe. I used a cardboard circle and printed out a Lego sign which I placed on top of his head (not seen).

My son did not mind not being able to walk around too much, but he certainly enjoyed the fact that he won the costume contest at his school and had his picture taken by people who loved his costume.