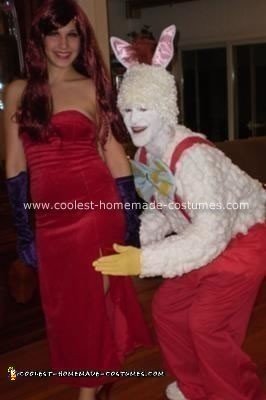 Our Jessica and Roger Rabbit Halloween Costume came from hours of thinking and searching the internet for original couples costumes. Two weeks before Halloween we finally came up with our costume idea. With the help of our families Mr. and Mrs. Roger Rabbit were born!

Now that we had a great costume idea we had to figure out HOW we were going to make these costumes! We wanted everything exact down to the last detail. We began with Roger’s shirt. We bought a white sweatshirt and hot glued cotton balls on one by one. This we did in 24 hours overnight with lots of help!

Next we traced the pattern for man’s pants and suspenders and began sewing. The bow tie was a clown’s tie which I covered with blue felt and yellow felt polka dots. Next we needed his hair and bunny ears of course!! His hair is a furry snow hat, the ears are bunny ears, Roger’s red hair was a horses tail from another costume, his feet are white slippers, and after long hours at multiple stores we finally found yellow gloves!

The only thing left was Jessica Rabbit! Finding a dress for her took forever and we were out everyday, all day and night looking for the perfect Jessica! The dress was originally meant to be Mrs. Claus but with some scissors, some thread and a needle that costume quickly became Mrs. Rabbit. The wig was found by another family member who had been helping us piece together our costumes. I could not find a red long haired wig anywhere! I don’t even know where it was finally found.

Last but not least we found the signature long purple velvet gloves, the red shoes and the bright red lipstick to match. Our costumes were finally complete!

We wore these costumes three times and each time we were more in costume than the time before!! We had a great time and everyone loved our idea.