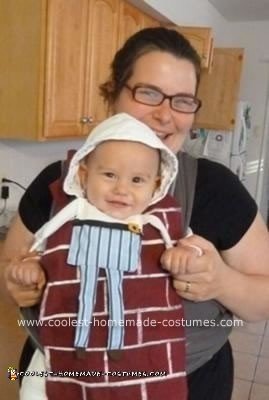 For Elliot’s first Halloween, I wanted to make a special costume but I didn’t have the time or sewing skills to make an elaborate get-up, so I put together a great costume hack. I decided to make a simple Humpty Dumpty costume that hangs off of a hooded sweatshirt, making Elliot look like a big-headed nursery rhyme character.

First, I cut a piece of red flannel into a simple bib for Humpty’s wall. I used masking tape to paint white lines so it would look like brick and cut a hole for his head. No need to sew the edges if you’re in a hurry!

Then I made a simple little body for Humpty using fabric scraps I had around the house. I sewed it quickly, but with fabric glue, this could be a no-sew project. I gave Humpty classic striped pants and a frilly tie. His shirt is a recycled t-shirt and his hands are pieces of white vinyl.

On the back of Humpty’s shoulders I sewed two pieces of velcro, and sewed their matching backs to a hooded white sweatshirt that Elliot already had (these are removable, so the shirt isn’t ruined). Humpty’s back and the velcro will be hidden, so you can see that I didn’t finish it carefully or even use matching thread.

When it was time to dress up, I slipped the brick wall bib over Elliot’s head and hung Humpty’s body from his hood, so it looked like Elliot’s head was Humpty’s oversized head. This was a perfect costume for sitting on the floor at our party and riding in his stroller, but Elliot was happiest when I carried him in a baby wrap, showing off his costume in style.

The best part of velcroing the costume to a hooded sweatshirt was that it could come off so quickly, like when Elliot started chewing Humpty’s foot a little too enthusiastically! 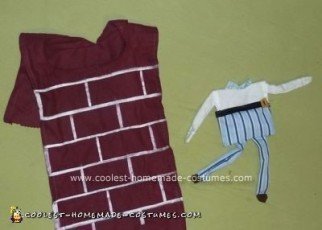 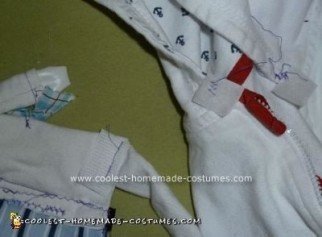