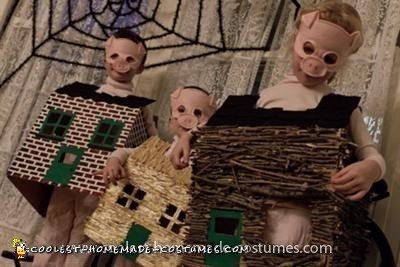 We have twins and a singleton and are always looking for “3” ideas. We started with pink turtlenecks and leggings from Old Navy. I purchased the felt pig masks from a craft site and then copied them to make one more so that I could be the Mother Pig. I also ended up making one out of gray felt so their dad could be the Big Bad Wolf.

The houses were made from small boxes purchased from an office supply store. We cut off the bottom flaps so that they could walk. To make the shoulder straps we cut off two flaps and made a hole in the top for their heads to go through and then connected the sides with electrical tape.

We cut holes for the windows and painted the doors and window frames. The straw house was made by hot-glue gunning straw over the walls and roof. The stick house was similarly made by gluing sticks we picked up from the yard on the 4 walls. The roof was then painted black and I made the roof tiles by cutting half ovals out of sticky sided black felt and placing them down in an overlapping pattern.

Finally, to make the brick house, I painted the walls white first with acrylic paint. I then outlined the brick pattern with quarter inch masking tape (quilter’s tape–from a fabric store) and sponged brick red and black paint over the white. I then peeled off the tape once the paint was dry and made the roof in the same manner as that of the stick house.

The kids got lots of compliments on this Homemade Three Little Pigs Costume and they were pretty easy for them to get around in (no falls!). We did have some major fighting about who got to be the brick house.