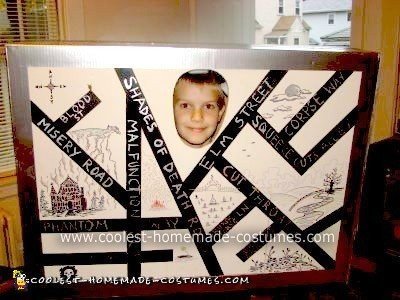 Our 9 year old son came up with this creative GPS navigational system on his own. We started with a plain cardboard box (you can use any size depending on how small or large is available). We had an empty 32″ TV box that we first spray painted with gray primer. Then we taped off the front section and sprayed the back of the box black. Then we taped off another small section and put newspaper over the rest to paint the edges with silver spray paint.

Then we taped off and newspapered the edges and back to spray paint the “screen” tan so that we would be able to see everything clearly. Next we used a ruler and taped off sections where we decided that we wanted streets to go on the screen and used a brush with flat black paint to make streets.

Then with silver paint (thanks to Google for the help of scary street names- which all of the ones we used are real)and a small thin brush, we painted the street names on, and the detail we used sharpies. He was able to wear whatever he wanted underneath the costume as it covered most of him. He was the hit of the town in his Homemade Halloween GPS Costume!