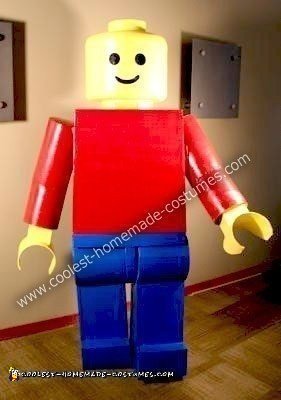 I spent about three weeks making my Homemade Giant Lego Man Costume which stands just over 7 feet tall. I used a lot of cardboard and had to do some creative thinking to get everything to work out. I used cement pillar forms for the arms and hands.

To get the right curvature for the legs and midsection I used a small piece of wood to give me a strait edge and bent the cardboard every inch so it would curve and be in one piece with the least amount of damage to the look. I used duct tape on the inside of the costume and blue painters tape on the outside, because it was smoother and not as noticeable.

It took three attempts to get the head right. What finally worked was to get some dense 1″ Styrofoam and glue several layers together. Then I cut the curve using a knife and sanded it down to get it as smooth as I could. I see through a mesh netting that I cut out of a mesh bag used to carry soccer balls. And painted it and put it into the neck so I can see. I wasn’t quite tall enough so I cut wood blocks that I taped onto a pair of shoes so I could fit into the costume.

It took 6 cans of spray paint and 2 bottles of acrylic paint to get the whole thing painted. It takes another person to help me get in and out of it. There are handles on the inside of the arms so I can hold them up. Movement is limited but it was a fun project to build and wearing it was probably even more fun!