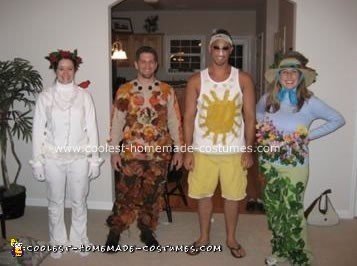 My husband and I along with my brother and sister-in-law went as the Four Seasons Group Costume. We basically bought everything at Kmart and Joann’s.

For Spring: I bought the sweatsuit and really cheap hat that I glued a baby bird’s nest (from Joann’s) on the top of. I also hot glued a bird to the top of the nest and also placed a drained egg shell in the nest as well. I then hot glued flowers to my top and leaves to my bottoms.

For Fall: I hot glued real leaves all over my husband’s suit along with fall décor. I would suggest using fake leaves for this, as the real ones crumbled and fell off during the party.

For Winter: My sister-in-law and I used cotton for snowy bundles hot glued on her suit and icicles around her neck. We hot glued a cardinal to her shoulder and made a really pretty head wreath as well. She also wore blue lip gloss and blue fingernail polish with glitter on her face.

For Summer: We think my brother looked more like a tourist than anything else, but it was hard to think of things associated with the season itself. He wore summer apparel while we covered him in self tanner and a sunscreened nose. We painted a sun on his shirt and shells around the neckline.

Everyone loved this idea and we won Best Overall at the party!