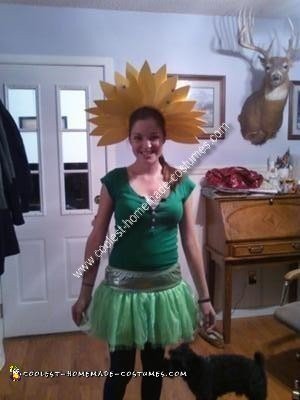 I looked really hard to find a Halloween costume for 2010. I wanted to be a cupcake but didn’t have the time to make it. And the store was sold out of the costume. So I saw some “flower” costumes online and came with this idea for a Homemade Flower Costume basically from the top of my head.

I bought a headband from Walmart. The green tutu is a childrens tutu from Walmart. Dark Brown tights from walmart. I’m wearing yellow shorts (I already had) under the tutu.

The yellow petals I bought from Michael’s (foam board) and I hand drew one petal and used that as a stencil to make the other petals. I used chenille stems to cover up the glue and headband, you could use pom poms which would probably look better and bumble bee stickers on the petals to add some character! Wear with flats.