Thanks to my dad, I have loved the Beatles ever since I can remember, but it was in middle school when my best friend, Hannah, and I were in full swing Beatlesmania! The only problem was this was in 1995, a mere twenty five years after the band stopped recording and fifteen years since all four members were still living. Nevertheless, Hannah and I enjoyed every song, every old album cover, and anything else we could get our hands on. I was in love with Paul, and she with John. Lucky for us, this was also about the time all of the Beatles anthology albums and television premieres were coming out.

Fast forward almost fifteen years. Beatles Rockband was about to come out and it was being heavily advertised. My dad and I were watching one of the Beatles anthology episodes while Logan, my one and a half year old son, was running around the living room. I had started thinking about what Logan should be for Halloween, but it was while I was watching this show that the Beatles costume idea came to me. I mentioned the idea to my dad and it snowballed from there. Right away my mom offered to make the costume. We decided to re-create the clothing from a photo taken of the Beatles early in their career, and I set out to find a small guitar and the right hair color for my young, very blonde, son.

After the correct fabric, buttons, and trim had been chosen, my mom started creating her masterpiece: a homemade Early Day Beatles Paul McCartney costume.

I brought home a variety of rinse-out hair colors, all of which temporarily turned my son’s hair “old lady purple.” I bought sticker paper and printed off Beatles decals to decorate the small black guitar my husband randomly found at a Cracker Barrel restaurant.

Finally Halloween arrived. Amazingly, my twenty month old child allowed me to spray his hair with a brown hair spray I found last minute at Sally’s Beauty Supply. Although he didn’t pose or sit still for great pictures, I think you get the idea. He was a hit everywhere we went and has received a lot of compliments since.

I am so lucky to have such a talented seamstress for a mom, and a dad that introduced me to a group of four guys that continue to influence people decades after they put down their instruments. 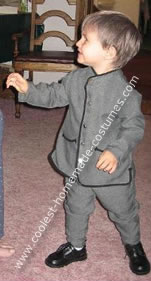 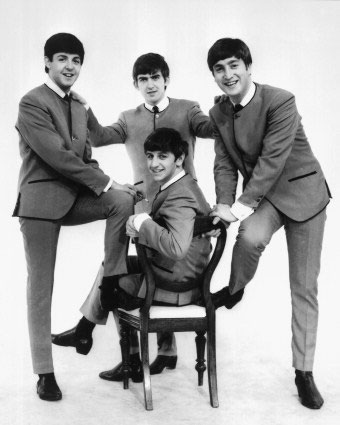