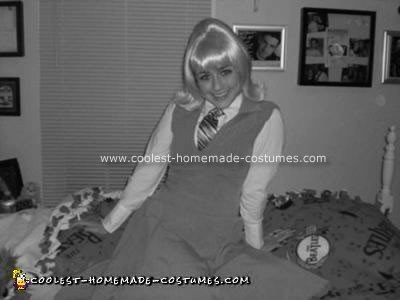 A lot of people tell me that I was “born too late” in the sense that I really am not interested in what most teenagers my age are these days. My dream era is the 1960’s, for many reasons, but the biggest one is BEATLEMANIA!!!! I mean, what girl wouldn’t love to faint and cry of hysteria watching them on the Ed Sullivan Show?

Anyways, along with the Beatles came Pattie Boyd, a pretty British model that captured the incredibly handsome George Harrison’s heart when they met on the set of “A Hard Day’s Night”, the Beatles’ first movie. They later were married, before Pattie cheated on him for guitarist, Eric Clapton. When I was thinking of Halloween this year, I knew I wanted to be Pattie, but I wasn’t sure exactly how.

Then, it came to me! I decided to be Ms. Boyd when she and George first met, as one of the schoolgirls in “A Hard Day’s Night.” I needed a gray v-neck jumper, a striped tie, and a white, long sleeved, collared shirt. That certainly wasn’t the hardest task though. The real adventure was trying to find the perfect wig that would transform my dark brown, curly hair into Pattie’s perfect blond flip (with that little bit teased in the back.)

To get my gray jumper, white collared shirt and tie, I headed to Salvation Army, where I can usually find stuff to piece together. However, with that comes the chance that I may have a hit or miss a day in shopping. Luckily, I found the perfect gray dress, and in my size too! The only problem was it had elbow length sleeves and belt-loops! However, I was able to cut off a bit of the sleeves and tuck them in to get the sleeveless look as well as just undo the stitches in the belt-loops.

I just happened to find the tie (again, hit or miss) that day as well. I already had a white collared shirt, but if I didn’t I could have easily found one there. I also wore calf high white socks and little black heels, like she does in the film.

Finally, it was time for the hard part: finding the perfect wig! I got lucky and actually found a decent one on eBay. However, this was the most expensive part of the costume. It totally puts the perfect touch on it though! I mean, what’s Pattie without her beautiful hair!

So there you have it! I can’t wait to show it off in public, not that anyone but Beatles fans will know who I am. Just in case, I’m planning on wearing a name-tag that says: Hello, My Name is Pattie Boyd, and maybe even an I LOVE GEORGE button! I have been perfecting my British accent as well, you can’t get away as Pattie without one!

And one last note…..PRISONERS?? (her only line in A Hard Day’s Night!) 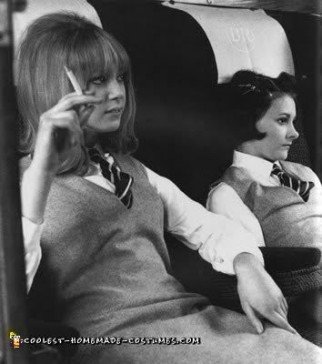 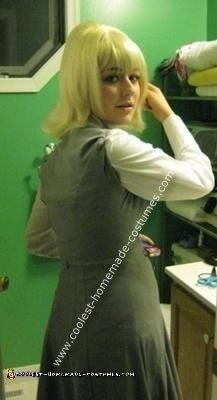