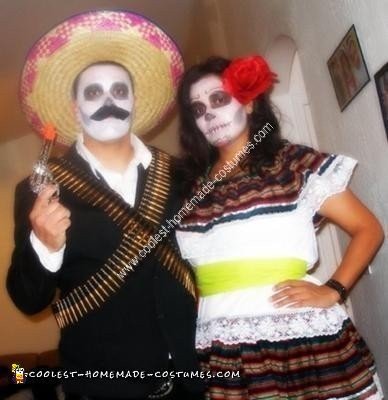 My birthday is on Halloween. I never dressed-up ever. So when I was pressured by my husband and friends to actually go out and dress up – I didn’t want to be something everyone else was, and since I am obsessed with anything that has to do with Dia De Los Muertos I had to come up with a homemade Dia De Los Muertos couple costume quick, like within less than a week.

I went to the state fair, seen the old school India Maria dress and I had to hustle the little old lady down to $15.00 she was really trying to ask for $40.00! I bought my flower from Wally World for about $2.00, the lime green belt/cloth was like $2.47 a yard (@ Wally World), I am not sure how much the face make-up cost, not a whole lot I am a very frugal shopper… or cheap whatever. I kept it simple with the designs on the face.

I totally loved my hubby’s costume, (all my idea of course!) he was Zapata but Dia De Los Muertos version, if you don’t know who he is Google him. I bought his coat at the good ‘ol thrift store for $2.95! I told you, I am frugal! His bullets from party city they were about $7-10, his pistolas for $5.00 (Wally World), and his hat we got at party city as well $10.00 and a mustache that was bought at a Halloween store and trust me it wasn’t more than $10.00.

I know it may not be the BEST version you have seen but I tried to stay close to my roots with Zapata and the whole authentic Mexican dress from Mexico, made by real Mexicans, with Mexican thread – at least that is what the little old lady at the fair told me! ;) 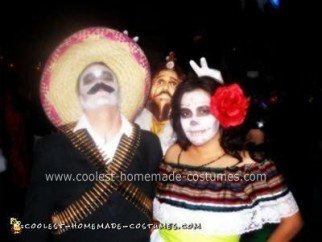 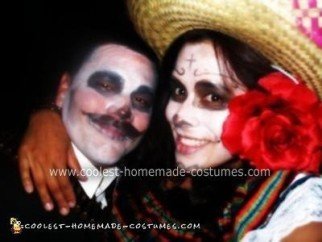