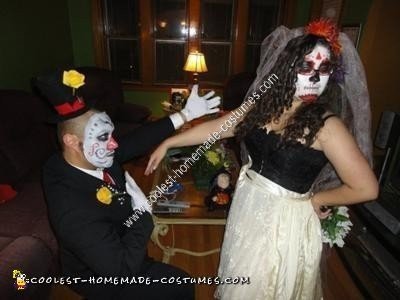 My best friend John and I capitalized on our tendency to pretend we are a fancy, posh couple of the world with our Homemade Dia de los Muertos Bride and Groom Couple Costume. I am so lucky he is willing to be part of most of my life schemes, and he’s a great backup for my counterpart in partner costumes and the like.

For my part as the bride, I actually did not need to purchase a single item I did not already own. I wore a black corset and a lacy ivory skirt I bought in Florence years ago. I layered it with this weird ivory taffeta type half skirt piece I found in a thrift store months ago and purchased thinking it could come in use for some future fancy scheme or another, and this created the illusion of a really cool bridal train.

I went up to the attic and dug through the assorted junk up there and found a bouquet of artificial white flowers in our box of Halloween items. I had used it years ago in high school when I dressed as a dead bridesmaid for Halloween. I’d already sewed dozens of tiny plastic spiders to the petals and wrapped black satin ribbon around the handle base in a bow back then. Perfect! I also found a long piece of very pale pink tulle that had once been draped in the canopy over my bed, and adopted this as my veil.

I left my hair down and doubled the sheet of tulle up, pinning it at the crown of my head where the fold fell. I am a huge wearer of flowers in my hair, so I had an ample collection to choose from for my bride costume. I ended up using a purple silk iris and some autumn colored chrysanthemums used for my Frida Kahlo costume two years ago. I pinned these along the side of head, leading down my temple.

John wore a nice suit and red tie. He cut the dress pants he wore to be short and tattered. He fashioned a small top hat from stiff black felt, using a glue gun to assemble it. He used some felt with adhesive on it to get the hat to stay on his head, as he’d just gotten a hair cut and it couldn’t be pinned in. He purchased real yellow roses to pin to his lapel and adorn the top hat. He also needed them to put in his mouth to appear sassy in photos.

We both used Ben Nye face paints left over from a stage make-up class I took in college to paint our faces in Dia de los Muertos fashion.

We looked pretty darn good, if I do say so myself :) 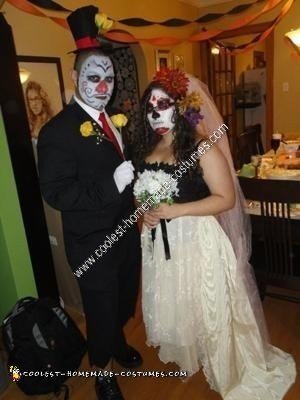 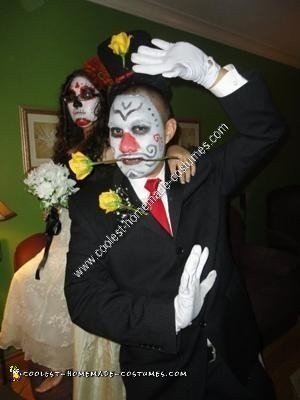 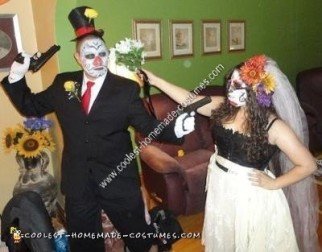