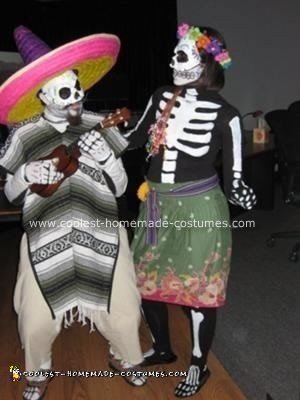 I’d wanted to do this Homemade Dia de los Muertos Costume for a long time and was so lucky to finally be with someone who is as crazy about Halloween as I was!

For the “body” part of the costumes, we bought turtlenecks, gloves, socks/slippers and I bought leggings, too. We had conflicting ideologies as to whether it should be black on white or white on black, so we decided to each do it the way we thought best. He bought white clothes to act as “bones” and painted black where there would be space between the bones. I bought black clothes and painted white where the bones would go. Neither of us are artists by any stretch of the imagination, so I figure if we can pull off the painting part, so can you! Be sure to put something in between the front and back of the shirt while you’re painting it so the paint doesn’t bleed through to the other side.

For the face, we bought some skull masks, cut it off from the cheek bones down, and modified it some to make it less scary. I’ve seen some other people on this site use only face paint to create a skull effect and if you can do that, that’s fabulous. Again, not so artistic here, so we decided to take the easy way. Also, having a painted mask that we just had to tie on for the top part of our face significantly cut down on the over-all getting ready time. For the bottom part, we made our teeth go wider than our mouths to create a more arts and crafty rather than realistic feel. I found it helpful to use my fingernail to scrape away the white paint where the black outline for the teeth would go first, otherwise, you’re putting black paint over white and it looks sort of smudgy and gray. I will say though, it looks extremely strange to smile and show your own teeth when you have a set painted on your face already. That was a scary effect we hadn’t planned on. We added some festive decorations to our face and that’s it!

The clothes were pretty easy. The “skirt” was actually a sundress that I cut the top off of. I looked high and low but couldn’t find an authentic looking Mexican skirt (that was a good price.) He got a serape and a big sombrero to finish his ensemble.