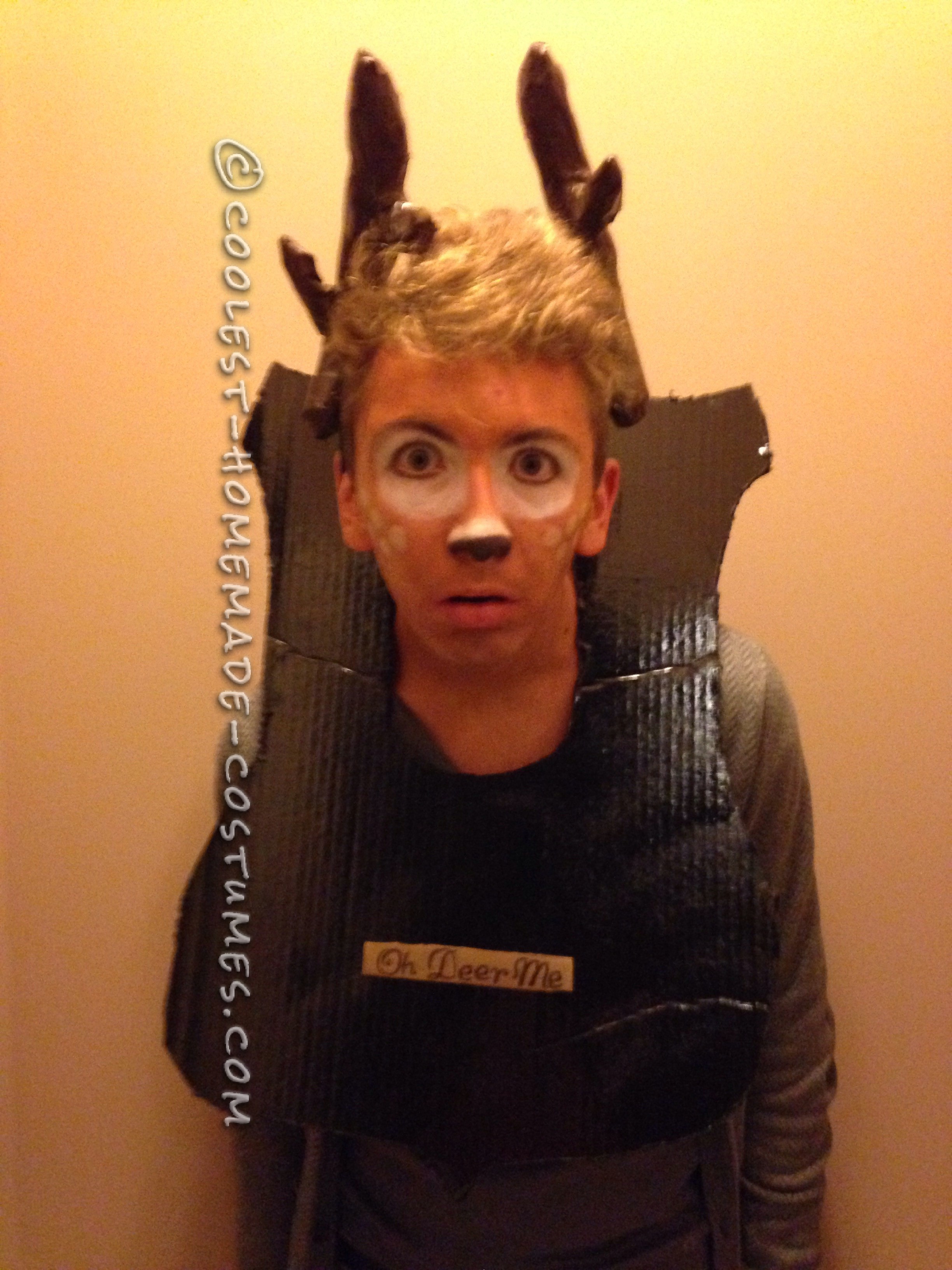 I’m not gonna lie, but this costume was roller coaster ride from start to finish, mostly because I’m the conductor of procrastination station and I am the laziest person I know.

Anyways, enough about my flaws. I was searching through Pinterest for costumes for Halloween and all of the costume parties I was invited to this month (it was actually just one party, but don’t tell anyone). I was struggling to find something that fit my needs, especially considering I get super competitive with my costumes and obviously I have to be the best. I also wanted something that was just odd and unexpected, because I live to amaze. And then I came across my inspiration. A picture of a girl in a deer costume came across my feed, and just below was a picture of a taxidermy boar and boom. It hit me. I was going as taxidermy for Halloween.

My friends and family had high expectations for my costume this year but never did they ever expect taxidermy. My first step was to get my makeup so that I could actually look like a deer. The only problem is I am a male and I had no idea where to look for the best deal, so I had to drag my female friends along to help. What was supposed to be a 20 minute trip to the store turned into four hours, but that’s another story for another time.

Anyhow, I bought foundation (I think that’s what it’s called) that was darker than my skin tone and I purchased black and white Halloween makeup. If you’re curious as to how to do the makeup you can search for tutorials online. It’s actually surprisingly easy, so no fears there. The next thing I had on my list was to make the mount headpiece thing, whatever that’s called. I took a piece of cardboard and cut it to the shape of a mount I had found online.

Be creative and make sure to search far and wide for your favorite mount shape. I was aiming for a more regal and formal shape and look and so I used black spray paint to paint the mount. Make sure to paint both sides because the back will be seen.

Okay, so I was looking at the mount and it just wasn’t screaming me yet, so I decided I should probably put a little caption on the picture, and I doubt you can read it but it says “oh deer me”. Super punny, I know. I simply cut a strip of card board and found a fancy font online so I could mimic it.

Finally, there was the minor problem of putting the mount on. I personally think I was super clever with this, but I cut a circle in the middle of the mount, big enough for my head, and then I cut a line from the head to the top of the mount. This allowed me to push one side down and pull one side up while I slide my head in. I know, I know, this is probably confusing but it should make sense once you start cutting.

So next, I made my antlers. These were the most difficult part of the costume by far. I had found a tutorial online for making antlers which called for taking foil and shaping it into the shape of antlers. Funny thing though, they need to be somewhat thin so that they can stay on your head. I made mine too thick and they ended up falling off. Okay sorry, back to the antlers.

Once I made the structure, I used paper mâché to create a smooth layer in which I could spray paint easily. I was on a budget so I just got brown spray paint from the store but for all you artsy fartsy kids out there, you can easily paint them to look more like antlers.

Once those are dry, you need to attach them to a headband so that you can actually wear them on your head (I stole one from sister). Honestly, if you don’t find a headband that works, you can use anything that goes on your head. Also, just a crazy side note, this is where you’re going to want thinner and lighter antlers so that they stay on your head longer. Get some a hot glue and stick those suckers on the headband. And again you may find something that works better than a hot glue.

Basically once you have the mount and antlers done, your costume is complete.

Obviously you’ll have to do your makeup so that you can look the part. However, there are some final touches. Wear all of one color so that you look more like a wall and your mount looks more like it’s hanging. I wore as much gray as possible so that it could contrast with the black of my mount. You also need to make sure you wear a shirt that’s cut low enough so that your clothing doesn’t show under through your mount. I think in my picture my shirt came through a little, but you should be able to figure out some fabulous way to keep your clothing out of the way.

I would recommend completing the costume a week before you need it so that you aren’t a train wreck like me. But the costume was incredibly successful. I was by far the best dressed at the party and had there been a contest, I would have so won. But since there wasn’t one, I decided to come here to see how I perform. Oh wait, hold up one last touch on the costume, make sure that when people take pictures of or with you, then you “mount yourself on the wall” and that you also have that deer in the headlights look.

The kids’ll love it. I know everyone at my party did. But this was basically a perfect costume and is probably my favorite costume I’ve ever had.