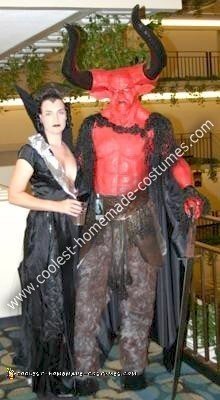 This Homemade Darkness Costume from Legend was my second attempt at creating this iconic movie monster; Darkness from “Legend”, a fantasy movie from the 80’s starring Tom Cruise and Tim Curry. Looking back at my previous effort, I must say this one came out much better. I learned a great deal from Halloweens and conventions about techniques and materials I had never heard of the first time, foam latex and life casting being the most important.

I started this time with the chest/torso since that was one of the weaker aspects of the first try. After creating a duct tape duplicate of myself (here is one of the better tutorials online…), I carved muscles with plasteline clay over the dummy, then made a cast of it using Hydrocal plaster. A layer of red tinted latex was brushed into the mold, followed by the foam latex which expands filling the shape of its container.

This piece was then glued/sewn onto a tight fitting long sleeve shirt. The arm/shoulder muscles were then cut from upholstery foam and glued in appropriate ‘muscle’ patterns on the shirt. The whole torso was then wrapped in ‘pre-wrap’ (the foam stuff you put down before taping injuries in sports) and then covered with multiple layers of red liquid latex.

The head piece and horns were made with paper mache over clay forms and painted. The face and neck were also created with foam latex. Again, the pieces were carved with clay over a life cast of my head, cast with plaster and filled with the foam. The face was made up of 8 separate pieces: forehead, nose, 2 cheeks, chin, neck/traps and 2 ears. All of these had to be put on at the time of wearing the costume since they are all adhered to my face to allow articulation.

The pants were sewn from ‘faux fur’ and painted. The hooves were made from wood and fiber-glass to give a slight animal look to my legs. The cape and all the trim were created to match the movie version as close as possible, but also served to hide seams where various parts of the costume came together.

After I was finished this Homemade Darkness Costume from Legend, I wished I had documented the entire procedure with pictures, but I only have a few of me with the makeup was in progress.

All in all, I was pleased with the finished piece and it went over really well at DragonCon and Halloween that same year. I’m considering redoing certain parts of it and trying it again in 2010.

Just a note: If anyone does this or a similar costume, be warned: It was EXTREMELY hot! I had friends dump cold water down the back to cool off as well as drank LOTS of cold water. I have since made a ‘poor man’s cool suit’ for this type of outfit. Get large diameter (.75-1”) vinyl tubing, wrap around your torso multiple times and tape in place, with one end at the neck and the other near your waist. Put caps on both ends and have them accessible after costume is put on. When you get too hot, have a friend pour ice water through neck end, then cap off. After the water warms, pull plug at waist, drain water, recap and refill. It actually works quite well. Good Luck!