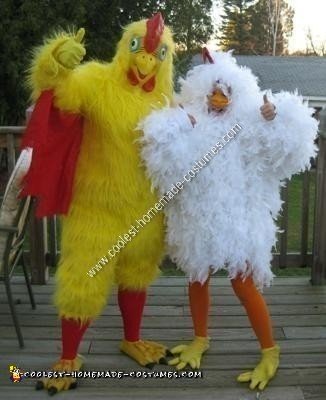 I made this Homemade Chicken Couple Costume for my daughter after hours of searching for a unique and original costume online. I used a couple ideas I saw online and mixed them all together to come up with this costume.

I started out by using a large over-sized white zipper front hooded sweatshirt (I used an adult Large, she is in a girls 10/12). That way it covered up her tush and she could also layer warmer clothes under it so that she stays warm. I bought high loft feather boas (12 of them) 72″ long. I spread the sweatshirt on the floor and very carefully started stitching by hand the boas to completely cover the entire hoodie.

My living room had feathers everywhere, and my dog was going bananas!! From start to finish it took about 5 hours to sew the boas on. I then took some cardboard and formed the red thingy for the top of the head and wrapped red felt around it and sewed that to the hood. I got some yellow felt and shaped a beak, and sewed elastic bands to wrap around her head.

To finish off the costume, I bought some orange leggings for her to wear. And then for the feet, I used some rubber yellow dish washing gloves and stuffed the fingers to keep them stiff, and then slipped the gloves over her shoes. It was a tight squeeze, but they actually held up wonderful! After 2 parties and a couple hours trick-or-treating, she only had one small hole on the heel.

My car still has feathers floating all over. She won 3rd place in a local contest and I also dressed up in a (store bought) yellow chicken costume and we were in a Kid/Parent contest and won first place in that one. It was a last minute decision for me to dress up, otherwise I just would have made one for me to match hers. I think I just might next year, she had so many compliments. I was thinking of maybe doing a rooster for me next year.

To wrap it up, I would say about 1 out of every 3 people we saw asked her to do the “Chicken Dance” So funny!! 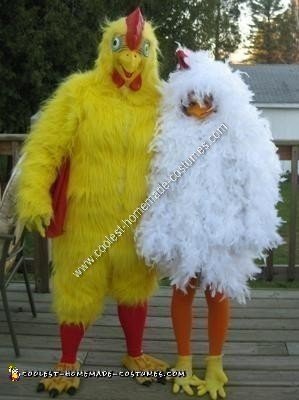 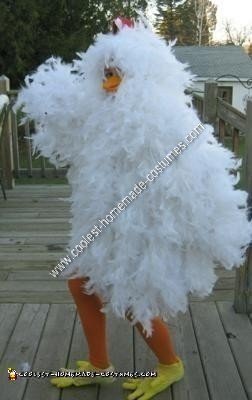 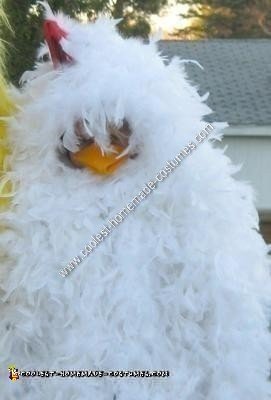