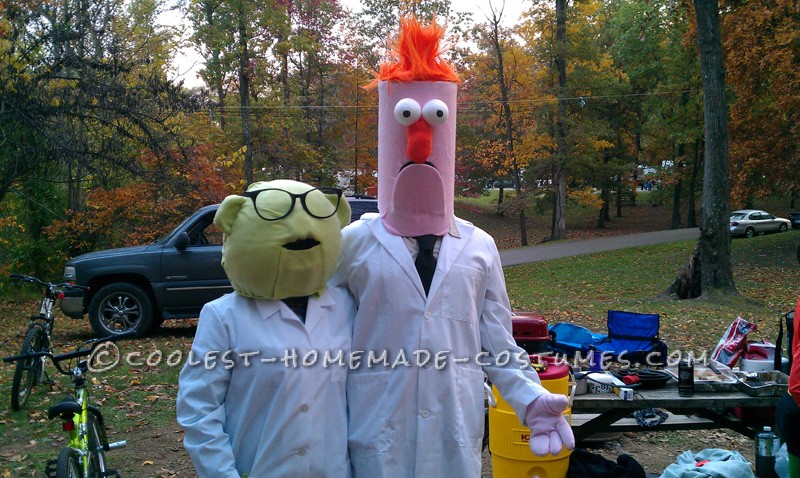 First I paper mache’d around a beach ball.  It took about 3 layers to make sure it was going to be strong enough to not break if it was accidentally dropped.  Once it all dried it was easy enough to simply deflate the ball.  Then I placed the paper mache ball on my head to determine where the mouth would need to be cut out in order to adequately see.  Next I took some quilt batting and spray adhesive to smooth out any uneven spots in the paper and to give him that puffy Muppet look.  Then I found some green fleece at a local fabric store and used the spray adhesive to stick the fleece to the batting. Next, I took some see-through black material to cover the mouth opening so my face cannot be seen. The ears were cut out of insulation foam, covered in the fleece, and attached by brass fasteners.  Finally, I took some oversized clown glasses and sprayed them black.  They were attached to the head by brass fasteners from Office Depot.

Beaker’s head starts of with a cement tube from the hardware store.  His head is about 1/4th of his total height, so this was used to determine how much to cut off the tube.  I penciled in the approximate locations for the eyes, nose,and mouth opening.  I cut the mouth out, but left it attached at the base and propped it open with foam in the corners.  For the top of the head, I took 1/2 inch think insulation foam to close it off.  Next, I took some pink fleece and wrapped it around the tube.  (I ended up having to spray the tube with white spray paint to cover up the writing so it could not be read through the material).  For the nose, I took some orange Halloween socks to make the oblong shape and attached it with the brass fasteners.  They eyes are made out of white styrofoam balls and black sharpie for the pupils.  These are also attached with the brass fasteners.  The hair was created by taking an orange Mohawk wig from the party store and cutting it some so that it fit on top of the head.  I also added the see-through black material to the mouth of Beaker.

With the leftover fleece material, I created 4 Muppet hands complete with only 3 fingers and a thumb.  I made them big enough to fit over my winter gloves so they would also have that puffy Muppet look.

Both costumes then used a lab coat, shirt, and tie.

My boyfriend and I wore these costumes to as many things this year as possible.  Everywhere we went, we would have our picture taken with people who grew up loving the Muppets.  Of course, everybody always recognizes Beaker and “that other guy”.