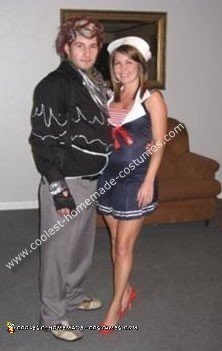 A couple years ago, I decided to be one of my heroes in all of cinema; Big Ern McCracken from the movie Kingpin.

The costume was fairly easy to recreate. I purchased a comb over wig, and painted the hair brown because it was gray. I went to Wal-Mart and bought a pair of cheap gray slacks, and a cheap button down black shirt (each under $10). Found a good picture from Big Ern’s final scene of the movie, and got a white paint marker and drew the designs like he had on the shirt. I also bought some silver material to make my scarf thing, as well as a cheap glove and cut some of the fingers off of that.

Last thing was the back harness that I found around the place that I worked at; painted some white lines on that too. I also put some stuffing for my stomach, because he’s got a gut in the movie.

I really think it came out looking pretty good and was fairly cheap. Probably spent around $40 for everything.