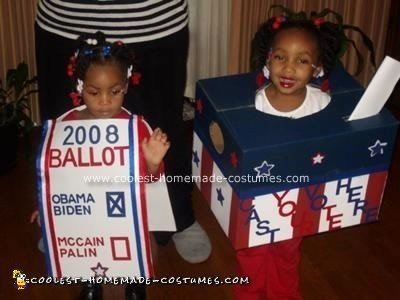 This Homemade Ballot and Ballot Box Costume is actually last year’s costumes but I received so many compliments on them that I decided to upload and share. Since Halloween last year was right before the election and we were die hard Obama supporters, I decided to do creative and political statements.

With a 1 and 2 year old, I opted to design ballot and ballot box costumes. For the ballot box, I found a box that was big enough to fit over her head. I cut out holes for her head and arms. We had paint at home leftover from previous home improvement projects so I used that to paint the box. I used blue painters tape to tape the box off and paint the stripes. I used felt letters and stars to decorate the box and display the message. I cut a slit in the top of the box and hot glued a piece of foam in the slit to resemble a ballot that had been cast.

For the ballot, I used the same foam paper and attached a ribbon on both sides to rest on her shoulders. I used felt letters and shapes to write the ballot message. We used glitter glue and star stickers to decorate their faces.

Their costumes were the talk of the Chicago and well loved by everyone, well the Obama fans of course!