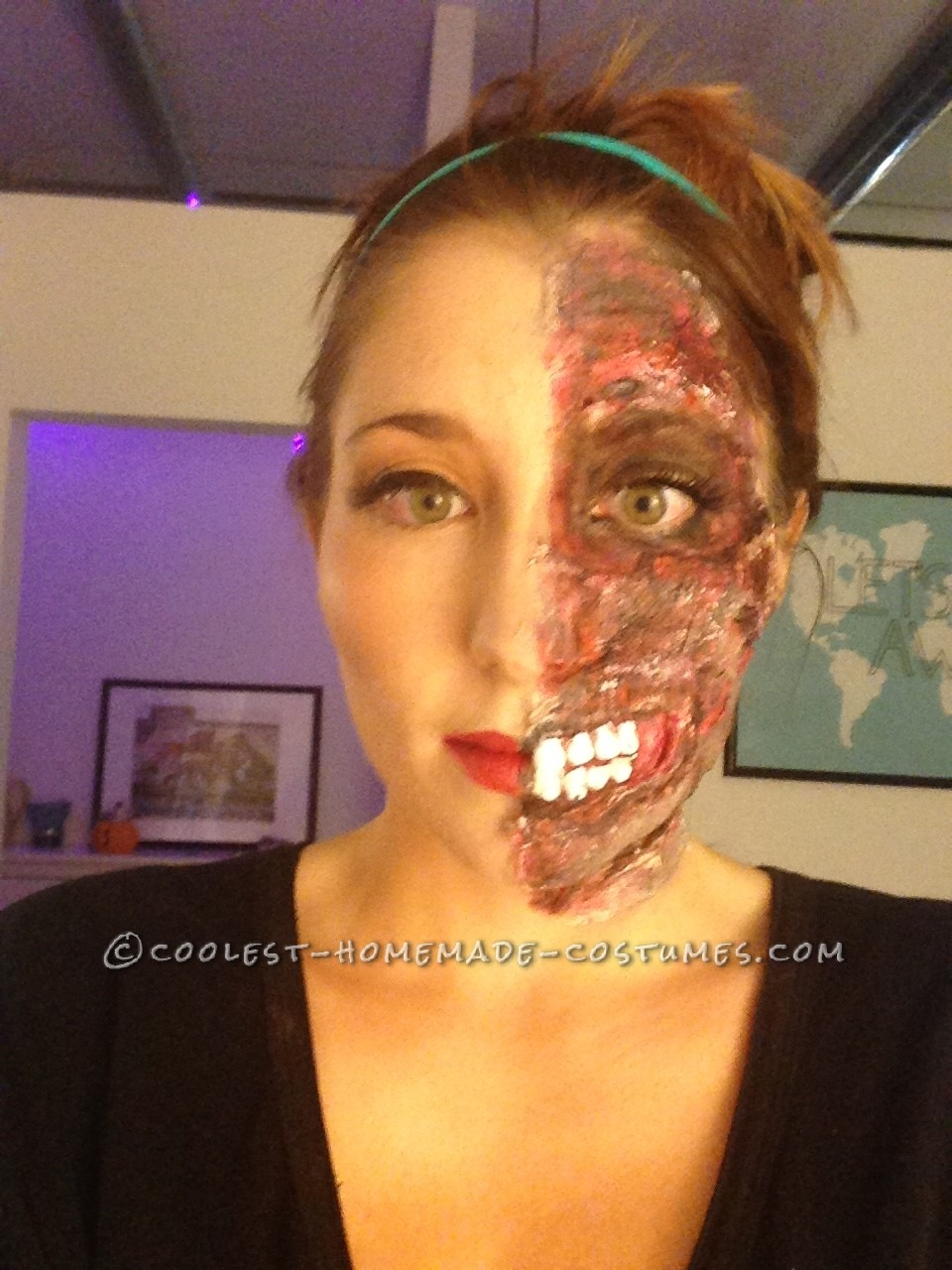 Two words…Theatre Bizarre.  If you haven’t heard of it, get to google quickly or better yet, come experience it for yourself.  This infamous Detroit Halloween party is one that inspires greatness.  The party is now hosted in the historic Masonic temple and draws over 3,000 party-goers who spare no expense in bringing their imaginations or nightmares to life.  I knew I had to step it up for this event and be something “out of the bag”.  OK….exposition over.

I’ve been collecting pictures of ideas from movies/tv/life and actually while catching up on Breaking Bad I found my costume.  At the end of Season 4 **Spoiler Alert** Gustavo Fring’s face gets blown off.  The juxtaposition of the two faces made me want to re-create it (in a girl form…since I’m a girl).  While I could have done the Breaking Bad route, I decided to go for the classic Batman villian, Two-Face.

To start, I looked at the Coolest Homemade Costume website (and youtube) for inspiration and ideas.  There were many that were very well done but didn’t exactly hit what I wanted to do, especially as I’m a lady.  I didn’t want to go the blue version or the mis-matched suit version but rather the Aaron Eckhart grotesque version.  From there I picked up a suit, white button down, and tie from the local thrift store and a mini blow-torch from the hardware store.  My dad and I burned the left side of the suit, quite artfully.  We went a little crazy on the arm of the suit coat and just ended up torching off the elbow.  It smelled AWFUL…but looked great. **If you try this, be careful!!  Fabrics burn differntly and some will just melt.  Make sure the area is well ventilated and use all safety precautions**

The next portion was make-up!  The whole look took about 1.5-2 hours and was entirely a day-of experiment.  I am not a make-up artist and just used things I had plus some basics from the local halloween store (spirit gum, liquid latex, red, pink, black, and some rubber scars).  I started by taping right down the center of my lips then I drew an outline of the “blown off mouth area” and built it up with scar putty and painted it pink, then red.  I attached some ligiment-y looking rubber string things across the area with spirit gum.  Finally, I trimmed and painted little girls fake nails (all I could find were decorated ones) with whiteout and glued them to my lips with spirit gum and duo eyelash glue.  After that the liquid latex and kleenexing began.  I further built up the area around my mouth (so the interior would really look recessed) and applied a few rubber scars I bought at a Halloween store.  Then I basically “papered” the whole left side of my face and neck and altered the thicknesses of the layers.  After that was applied and had dried, I used a mixture of red and pink make-up.  After it was sufficiently red, I added blacks and purples to achieve a charred look.  Beyond that, I basically did a trial and error process adding some skin toned foundation color and lightening the raised portions of my “skin” and darkening the inset areas.  I then heavily lined my eye with black eyeliner and added black and purple eye-shadow as I didn’t put any latex near there.  As for the “good side” I used my routine going out make-up look with an exaggerated red lip and dramatic eye make-up.  Finally, the hair just involved a dry shampoo powder and lots of hairspray and teasing on the left and just styling on the right.

My final touch was printing out an “I believe in Harvey Dent” button and attaching it to a pin I already had.  This along with the suit and make-up really sold the look.  Everyone was able to easily recognize who I was and it went over really well!  I found several Batman(men?), Jokers, and other creatures that all wanted to be in photos with our group.

The only difficult thing was not smiling for pictures and drinking through a straw the entire night because those lip teeth looked very creepy!

Ok…that was a lie.  The MOST difficult thing was peeling the whole thing off at the end of the evening.  It was pretty terrible…but super worth it.

P.S. you may note in the pictures my lovely friends went as Harley Quinn and Poison Ivy and looked awesome too!