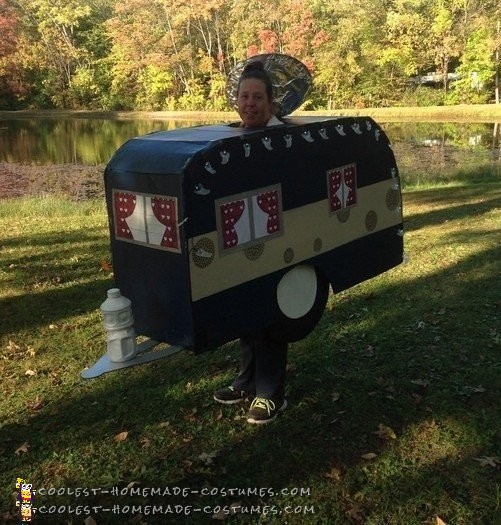 My family and I like to go camping before Halloween. We go to a campground near us that has some activities all weekend. Last year I went as a campfire and it was a hit. I thought what to do for this year, and I decided a camper would be fun to make. That is how I came up with this costume.

Near the beginning of September, I set out on finding a refrigerator box. I was able to find one at a local appliance store near me. After getting one, plus some other large boxes, I went and got all the materials I needed to make this:

The first step was to cut the basic shape out on the one long side. I did that and matched the other side up as well. I had two long pieces about six inches wide,  which I glued together, which then became the top, front, and back. When this was done I spray painted both sides and the middle piece as well. After letting that dry, I set out on making all the components that I was affixing to the body, before gluing it all together.

My second step was making the windows, doors, wheels, hitch, license plate and lettering on the back. This was probably the most time-consuming part of it all. I used graph paper to make all the windows and door. I put cardboard on the tops of the wheels to give it a three dimension look. After this was done, I was able to glue it on the body where I wanted it and put weight on it as well.

The third step was to glue it all together. This was the hardest because I needed to give the glue time to dry, as well as the flex seal on the flaps on either side. In the corners, where it didn’t quite meet up, I used foam spray to fill in the gaps. After that dried, I added the decals and the lights.

I took it camping last week and wore it twice. I walked around as the kids were trick or treating. Everybody absolutely loved it, and I even got some candy too! I then wore it that night for the adult costume contest. It looked neat lit up at night. I was awarded most original for my costume!

I had fun making this, but it took me several weeks to put all together. The hardest part was gluing both sides to the middle piece. I really had to let it dry and set, so it would be sturdy. I’m looking forward to wearing it on Halloween night and hand out candy! 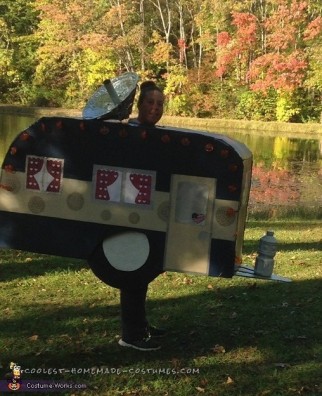 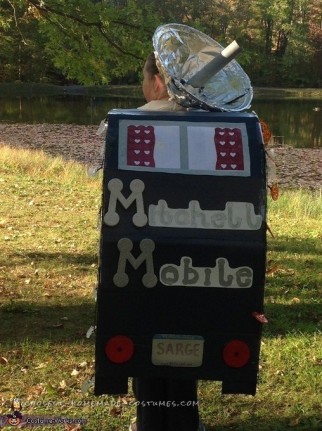