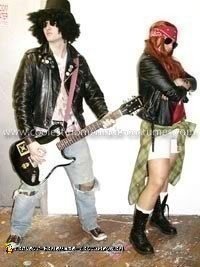 This Homemade Guns N Roses Axl Rose and Slash Couple Costume is me (Axl) and my now husband (slash) as Guns n Roses a couple of Halloweens ago, the outfits were pretty easy to put together.

For Axl, I went to a close thrift store and got a bright Football shirt and white spandex shorts that I later cut into shorts. I already had the flannel, but you can also find that at any thrift store. I’m a girl so I had to stuff my crotch with a sock. For the hair I went to a costume shop and got whatever straight red wig they had. The mic I made out of foil paper and a random stick, but I guess these days it’s easy to just go to a Dollar store and get one of those echo mics and paint it black. The bandana I got from a Dollar store just like a few of the fake tattoos, the ones that didnt resemble his tattoos I drew with a marker, and the aviators I borrowed. But just like everything they are super easy to find. I put on some boots and the jacket I owned and I had to wear it because we live in NY and its very cold in Halloween, but its not necessary. The one thing I had to study was my snake dancing!

Slash, was even easier, he got a random white shirt rip it and spray painted, the jacket he already had but I guess any black jacket will do or best thing to do, go to a thrift store! The jeans, he had already but its obviously easy to make with an old pair, or cheap ones, rip em and make em dirty. The 2 things he bought was the afro wig and the hat, he borrowed the guitar from a friend, but as I said earlier these days anyone has a guitar hero guitar or any toy guitar would do the trick. Also he didn’t do this, but a fake cigarette will really nail the Slash costume. 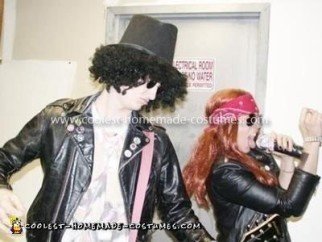 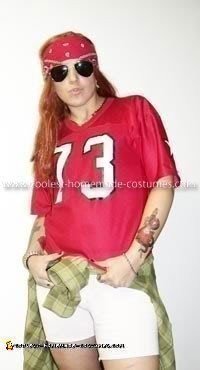