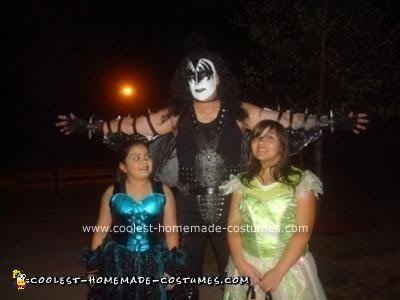 I have made a Gene Simmons Costume before but it was pretty weak so I tried it again with better results. I made this from bits and pieces. I did get the boots ($49.00) on EBay and used silver tape to make the teeth. I brought a bunch of studs (EBay) for about $10.00. I purchased some black tights and my wife sewed on a vinyl triangle that I outlines with studs.

I bought the spikes at a Halloween store (they are rubber and was a necklace), so I cut them into individual pieces and glued them on my wings and arm pieces which was made on a vinyl material. I brought 3 yards of that material on Ebay for about $10.00.

The best tip I can pass along is with the wig. I bought a $20 wig and it was to bushy and I put it on my son’s head and cut it and shaved back the front so it was not so “Puffy” (thinned it out). When I put it on I had it sitting back about 2 inches above my hairline and used my own hair in the front. My hair line was too low and I could make my hairline resemble Genes better this way.

I had a blast and my kids were even proud of their old man.