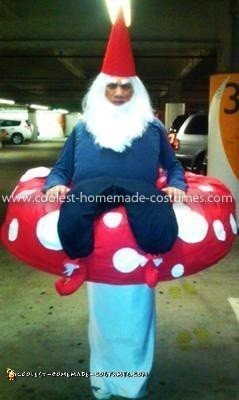 I originally came on to this site as inspiration for a Halloween costume. I have a graphic design background, so making my own costumes is a challenge but also my choice, I refuse to buy a costume. I found an illusion costume where a gnome is sitting on a mushroom, and I fell in love with the idea. The submissions on the site I felt were great, I just wanted to add my spin to it. I was thinking the bigger the better.

I had multiple JoAnn and Home Depot trips, but eventually put it together based on how I perceived it was put together. The base alone for the bottom of the mushroom is 4ft x 4ft. Needless to say, I couldn’t wear it in the car. It consists of about 12yds of fabric, and easily about 200 newspapers.

The Garden Gnome On a Mushroom Costume consists of different parts. The stem is almost like a long skirt that goes on first. Newspaper usually isn’t heavy, but 200 crumpled newspapers weigh a lot, so I had to use suspender type restraints to hold up the mushroom head.

Overall it took about 3 weeks on and off working on it. Roughly 30 hrs all together to finish the Garden Gnome On a Mushroom Costume. I attended the Huge West Hollywood Carnival that goes on every year. 400,000 people alone attended it this year, and I felt like a celebrity. I must have taken pictures with 300 people.

I had so many compliments from the idea to the execution of the costume that made all the hard work pay off. It was Great!

1 thought on “Coolest Garden Gnome On a Mushroom Costume”