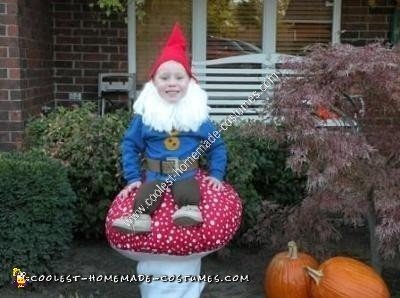 My mother, (Conner’s grandmother), is very creative, not to mention a great seamstress. But when I approached her with his homemade Garden Gnome Halloween costume idea, she really did not know exactly how she was going to make it work. She started out at the fabric store where she purchased the white felt (stem) and the red and white polka-dot fabric (top of mushroom). This sat on the kitchen cabinet for about two weeks. Let’s just say she was a little stuck at this point and did not know what to do next.

Finally, the week of Halloween, she decided to visit a thrift store where she found an old blue sweatshirt and a pair of old sweat pants. She sewed the pants to the inside front of the sweatshirt and stuffed the legs to make it look “filled out”. The shoes were actually a pair of shoes Conner had when he was younger! We just tied them really tight to the bottom of the pant legs. She also found a belt with a large buckle that she cut down to fit around the outside of the sweatshirt. She cut out yellow felt circles and decorated them to look like buttons on the front of the sweatshirt. The hat was the easiest part. She made it by using red felt! Pretty simple!

The mushroom was a little bit more complex. Here is where her white felt and red and white polka-dot material were put to work! She used a large wooden craft circle to make the round shape in the top of the mushroom and filled the top with a net that had the stuffing in it. Sort of like a net “pillow”. The net kept the cotton from coming out when he was walking. She sewed on red ribbon to the top of the mushroom to make it “hang” over his shoulders (much like suspenders). Since it was under his sweatshirt you could not see the ribbon, but it was much softer than just using plain suspenders. It also had a ribbon sewn to the top of the mushroom that tied in the back to help keep everything all together. The white beard was purchased at a Halloween store but had to be cut down due to the “gnome” being so small!

So, really the homemade Garden Gnome Halloween costume was two pieces. We put the mushroom on first (just like pants with suspenders) and then pulled the sweatshirt on like a normal shirt (just with legs hanging off of it). If you call that normal!? And, of course, the beard and hat.

The whole costume took about 1.5 hours and $10 to make! Believe it or not, but he absolutely LOVED his homemade Garden Gnome Halloween costume and did not complain one time about any of it! He really did get in to character, too. But as soon as Halloween was over, he took off his costume and said, “OK, I am back to Conner, now!” He is quite the character!!! 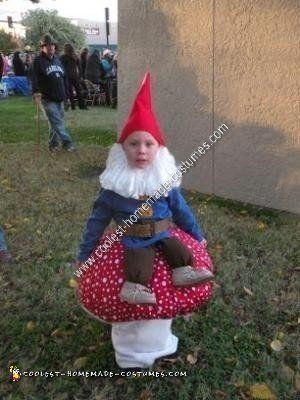 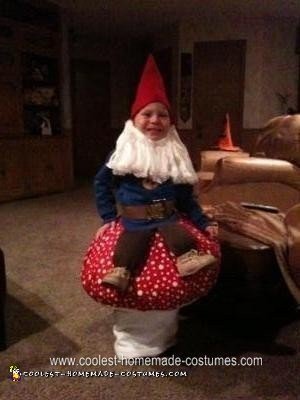 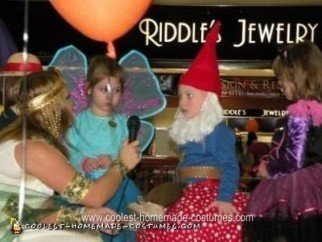