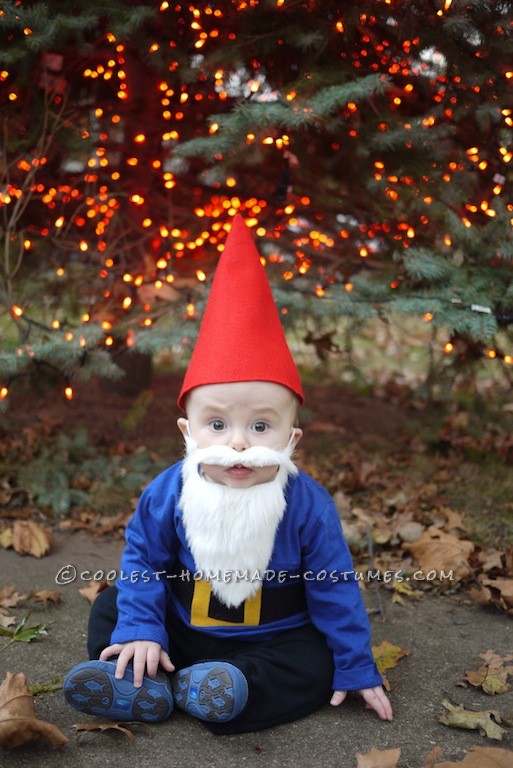 This is a baby gnome costume I made for my son, Max, who is six months old.  I wanted to make his first Halloween special by making him a unique costume that we would all remember forever!

After a lot of brainstorming my husband and I agreed that a gnome would be the perfect choice.  I started by doing a little research online to see what typical gnomes looked like, including the iconic travelocity gnome.  First I bought two royal blue infant long sleeve tshirts.  I cut one tshirt in half and sewed the bottom of it to the other shirt in order to make the classic tunic style gnome shirt.  I also ordered the shirt slightly larger than I normally would so I could fit a sweatshirt underneath for chilly trick-or-treating weather.  Next I picked up some red, black and yellow felt at my local fabric store along with some white faux fur.  To make the hat I measured the circumference of my son’s head and cut the red felt out into a triangle shape, with the base of the triangle the measurement of his head.

I then formed the triangle into a cone and glued at the seam.  Next I measured his waist and cut the black felt to make a belt, it is a simple long rectangle.  The buckle is made of a square of the yellow felt.  For the beard I measured the size of my son’s face and cut out a piece of the white faux fur.  I cut a separate mustache and then sewed it onto the rest of the beard.  I also sewed two elastics on either side of the beard which loop around my son’s ears.

The beard was by far the most challenging part of the costume as fur was flying everywhere when I was cutting it.  It also took a bit of trial and error to get the beard to fit correctly, but luckily Max was a good sport and didn’t mind wearing the scratchy beard at all.  My husband and I are thrilled with the outcome and hope you like it too! 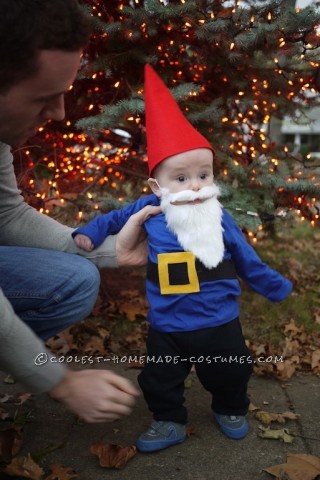 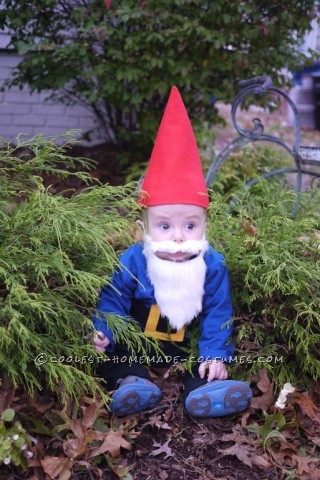