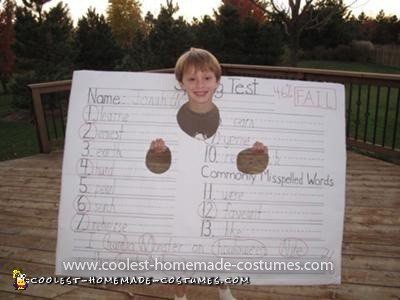 This FAILED Spelling Test Costume was inspired by your website! I loved the scrabble costume that is featured on your website and wanted to make one for my 8 year old’s school Halloween parade. For some reason he was not thrilled about wearing a scrabble costume. (he wanted to be a vampire).

I started to show the scrabble picture to his friends and asked if they would wear it if I made it. I received a 100% yes from his friends and my use of peer pressure started to work. I decided to make the costume and send it to school with him and see what would happen.

In the process of making the costume my son was watching a Halloween Episode of Fineas and Ferb, it was the Haunted House episode. There is a scene where the character Balgeet is dressed up in the Haunted house as a “scary” failed math test. My son thought it was hilarious and from that point the scrabble costume turned into a failed spelling test costume.

My son, was “on board” and the process of becoming a FAILED spelling test began! It was simple! I had a large piece of cardboard, cut a hole for his head and arms and taped white paper on it. I copied EXACTLY the format of the spelling test he takes every week. My son then wrote that weeks spelling words VERY WRONG! He wanted to get 8 wrong. He also has to write a sentence with one of the spelling words so we made up a Halloween themed sentence and made a bunch of mistakes there too. 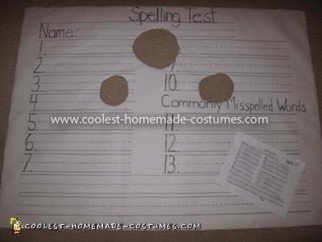 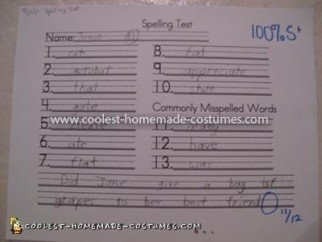 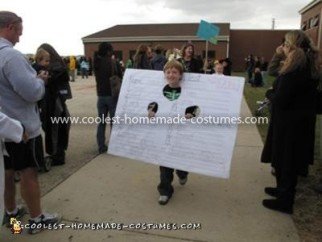 Clear Blue Pregnancy Test Costumes (and a Little Sarcasm, Too)