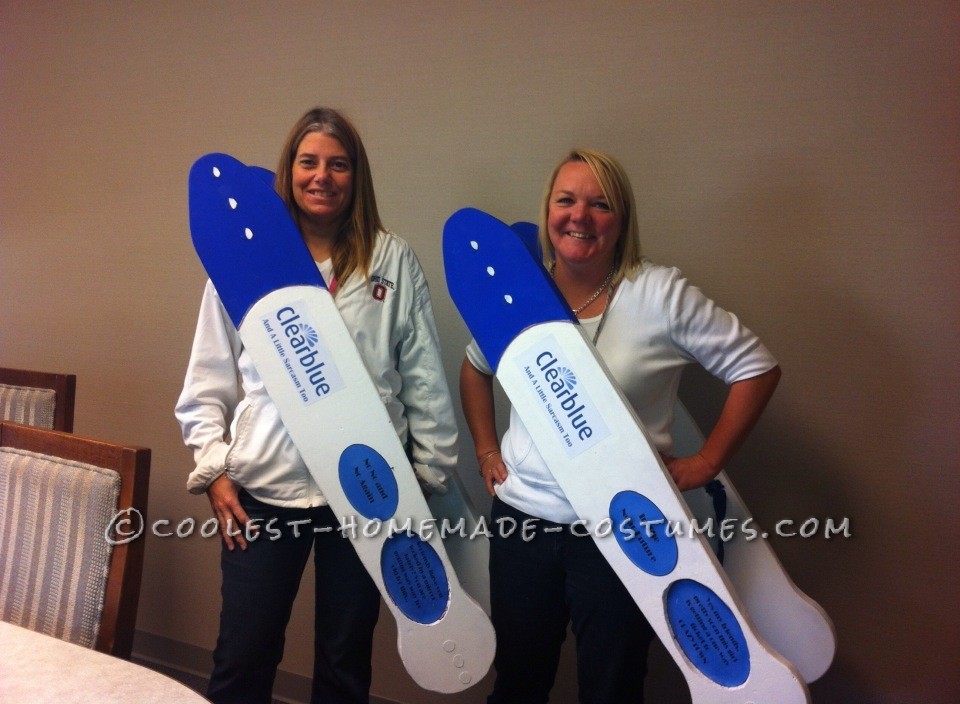 I have two friends at work that are currently pregnant and another trying to get pregnant. Having two middle schoolers, I never want to get pregnant again. So after brainstorming for original costume ideas for the work party, I decided why not be pregnancy tests. Last year our interpretation of the Kardashians took first place, so we wanted to follow that up with a repeat win. I looked on your site for inspiration. Even better, not one pregnancy test appeared. That is when I knew the idea was exactly what I wanted. Unique!

So I as thought about this, I realized all of the circumstances behind each of my friends and myself are different. A costume that just said pregnant or not pregnant would not represent us. Why not add a little humor to the tests. So that is what came about (Clear blue and A Little Sarcasm Too) Cecily, my friend who has been dating her now fiance for about a year is currently 5 months pregnant. Why not poke fun at how fast all that came about? Lindsey, is now having her first and only child she is quick to say, has been married for a while now and is considered high risk because she is over thirty-five. Not only was the idea original, but expanding the concept based on each of us added a lot more humor. However sad they didn’t have a contest this year. We were only allowed to just dress up. However had they, we would have been repeat winners for sure!

Step 1
Purchase one 1/2 inch foam insulation sheet. They come in pink large sheets at any home improvement store. Owens Corning make them. One could get a thicker sheet if they wanted too. Each sheet made two tests front and back side.

Step 2
Our tests are 8ins by 4 feet. So 12 cut outs could fit on one sheet. Once the 8 inch spaces were marked off, draw the design off on test on the sheet.

Step 3
Since the sheet is only 1/2 inch thick, it is very easy to cut with a razor knife. That is why I opted for a thinner sheet. Cut out the first cutout. Use it as a template for all of the other cutouts. Trace around it to make all remaining equal. Cut them all out with a razor knife. (If you want to indent your saying circles, this would be the time to do that. Cut out one or two circles in only one cut out not all of them. I discovered this at at a later time when I attempted to do this at a later step).

Step 4
Align several tests together. In my tests we had three cutouts to make each side 1 1/2 inches thick. Glue them together with foam glue. This glue can also be purchases at the hardware store and is used with caulking gun.

Step 5
Once the glue is dry run a piece of thick masking tape around the outside to cover up the seams between the cutouts.

Step 6
Use a sander or sand paper to create a smooth edge.

Step 7
Cut out the indention for the cap.

Step 9
I just printed off what I wanted to say on a computer and glued them to each test.

Step 10
Strap the front to the back side using Velcro and straps. I just cut some off of a reusable grocery bag 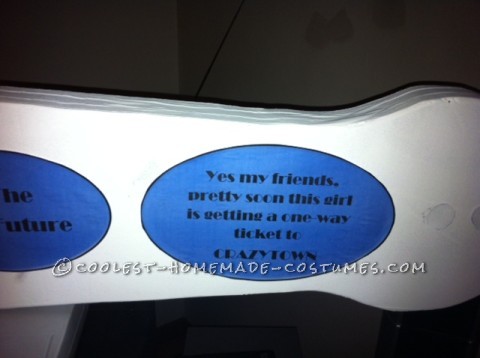 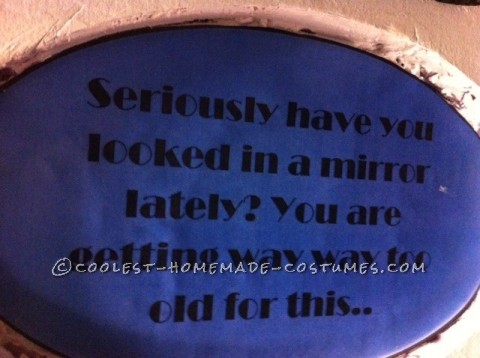