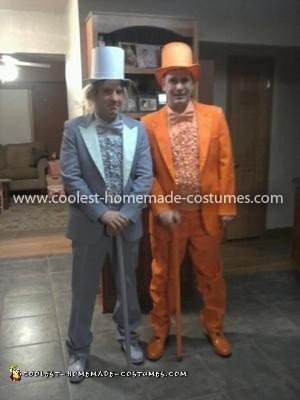 Who doesn’t love a great Jim Carey movie? It was time to brain storm for costumes, my husband and friend were sitting around being their normal selves. And *Ding* the light bulb went on! You guys should be dumb and dumber, and at that point it was decided.

I searched eBay and many thrift stores with no luck of finding nice vintage, yet affordable colored tuxes, or even the ruffle shirts for that matter. So this is how it was accomplished. I found on eBay some close to fitting white tux jackets, one pair of tux pants, and one pair of white chef/painter pants. I bought some dye for the oh so memorable colors they wore, however this became nothing more then a base color, as even with the poly dye, those jackets were not very accepting.

Along with the jackets and pants, I tossed in a sheet that I cut in half into each color, to be used later for the accessories and some pre-owned dress shirts. Once washed and dried I then spray painted the suits, make sure you do this days or weeks ahead of time, otherwise you will be very smelly when out and about.

My next step was cutting strips from the sheet that I then sewed into a tube, and pulled the loose string to make ruffles. Then you sew the ruffles down onto the shirt, I did five rows per shirt. I centered the middle one over the buttons to hide them. Next was the cummerbund, which was also sheet material, made some fold, pinned them down, and sew. I did not add the strap, I fastened them to shirt with safety pins.

Online I found how to make a bow tie, also using the sheet material. I also constructed their top hats using the mad hatter tutorial found online but changing to proportions a top hat would look like. Use the sheet again to cover the hat. Find some shoes you don’t mind spray painting to match. Buy a wooden dowel rod and plastic table leg ends to make cane and spray them to match also.

Finish off with finding a shaggy blond wig for Harry, and applying some tooth black out for Lloyds chipped tooth. 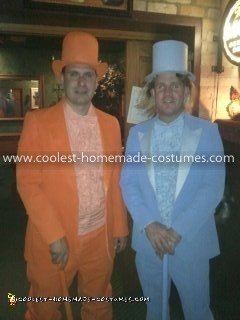 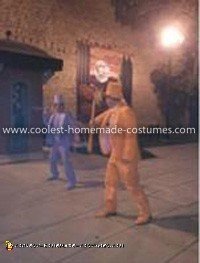