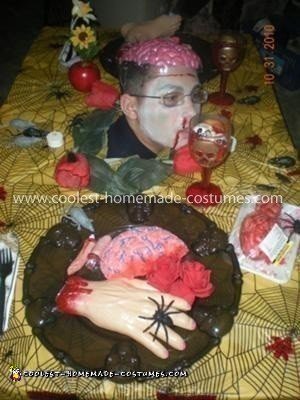 This Homemade Dinner for Two Head on Platter Costume was the easiest costume ever. I got every thing at the Dollar store. The blood splatter is the kind you usually put on your windows, the spiders, roaches, rats and mice were all available in the Halloween isle. Basically I got 2 boxes, 1 for the base and the other one I flattened out as the table top. I used a plain white one so the blood splatter would show and a Halloween one for the top. I glued the table cloth down and just put tons of blood splatter and creepy crawlies all over it. The cups have jello in them to look like blood. His brain is really a marshmallow brain container, I just ate the marshmallow and painted the container pink. Everything was glued down. I glued the bottom of the table cloth to the box, just so it would not flap in the wind. I set it up to look like a fancy dinner for 2 with wine glasses, candles (fake of course), flowers.

The dinner plates had a slivered finger, some fruit and either a hand or foot with the marshmallow brain. I cut holes in the front and the side just because I wasn’t sure how he would collect candy, but people got a kick out of putting the candy on the plate and his hand would slid up by his face to get it.

It was great seeing some of the faces of people, it was either disgust and gross or awesome!! 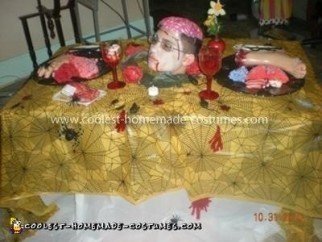