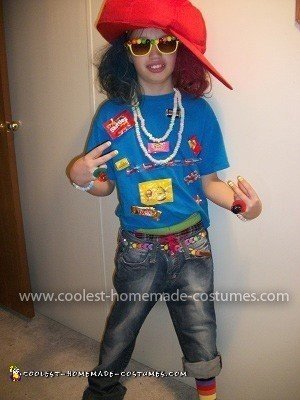 My daughter was having a hard time deciding between a rapper or a clown costume this year so I suggested that we combine the two ideas to a Homemade Candy “Wrapper” Costume.

The costume comes complete with cotton candy hair, candy corn painted finger nails, baggy pants that show boxers underneath, a rainbow belt, rainbow socks, an oversized rappers hat, sunglasses with skittles glued to them, a hand painted shirt with her name on it and a variety of candy wrappers. Candy necklace and bracelet bling, and gigantic lollipop rings.

The costume took about two hours to make and put together; painting her nails, curling and spraying hair, painting and gluing.

From head to toe:
Hair: I placed hot curlers in her hair for about 20 minutes then parted her hair into pig tails, and teased the two sides. When they were puffy I sprayed them with pink and blue hair coloring.

Make-up: I put bright lip gloss, blue eyeshadow, and bright pink blush on to give her a little color.

Shirt: I painted the shirt using craft paint and glued the wrappers on with a low temp gule gun. The exclamation point on the back has a peanted m&m for the point.

Shoes: The show were her own we just placed glow in the dark laces in them.

Sunglasses: I hot glued skittles to the rim of her sunglasses using the low temp glue gun.

The hat and the rainbow socks were purchased in the costume isle. The pants and the belt were her own. It is a very fun costume to make. 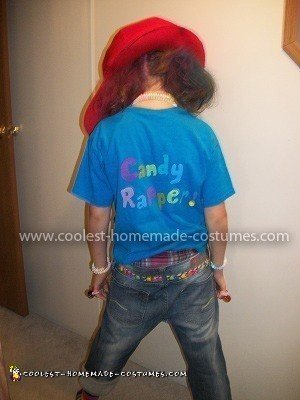 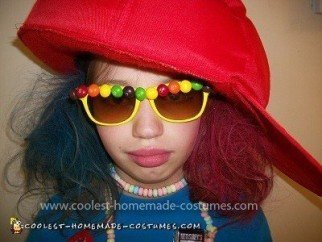 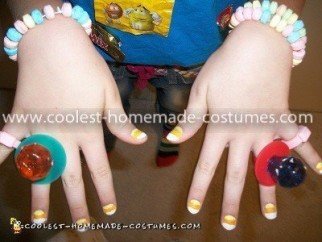