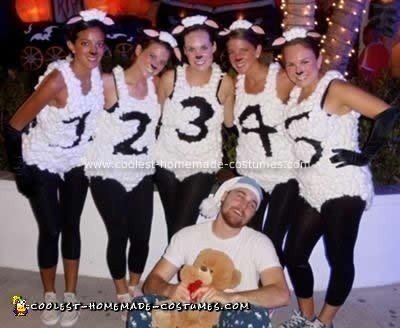 We found our inspiration from this website, took it and ran!

How to make the ears:
Make a stencil with paper first so all of the ears are uniform
Black Felt= Almond shape but leave a square tab at one end, about 1 inch long, 1 inch wide which will be used to attach it to the headband
Pink Felt= smaller almond shape
Glue Pink felt on black felt
Fold the black tab in half and glue to make the ear curve–> glue 2 ears on to headband
Cover glued on section with cotton balls (3 rows of 4-5 on bottom, one more central row on top)

How to make costumes:
First try on the tank top and underwear, tucking tank into underwear. Draw a line on the tank top marking the border between the two (you only have to glue cotton balls to this point). We rolled our underwear down twice so the bottoms would fit better and then we safety pinned them. Note, safety pin the opening in the underwear too.

Note: put cardboard inside the shirt/ underwear to keep front and back from sticking

Tank Tops: Cut large numbers from black felt and glue on first. Then densely surround the number, shoulders, sides, backs with cotton balls (helps if you fluff them up a bit).

Underwear: glue cotton balls on, covering almost the entire thing (we left about a 5 inch segment of the crotch open to make walking easier).

Accessorize as you want: We used pink lipstick and pink blush for our faces and we all wore short-top Converse shoes! Our guy friend dressed up as the guy in PJs counting us.

We had a ton of fun making the Counting Sheep Group DIY Costume and we even won our school’s Costume Contest for Best Group Costume!! Hope these instructions are useful! ENJOY