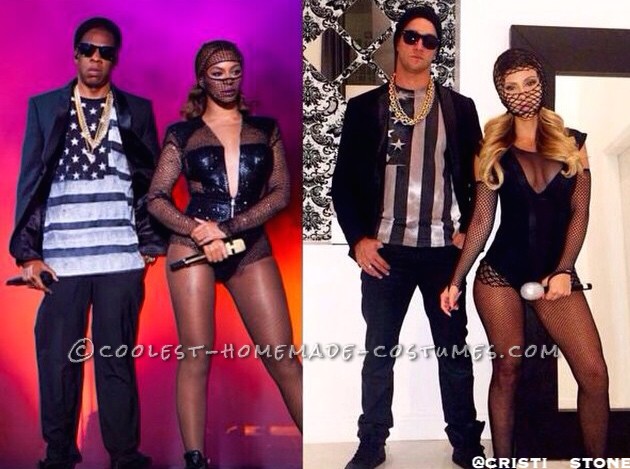 This costume was thrown together with $70 of last minute purchases. The JayZ t-shirt ordered from amazon $30, microphone and fishnet stockings/gloves and fake gold chains from local Halloween store. The JayZ beanie black sunglasses, black pants and boots were something that i already had

Peoples reactions: “that’s Photshopped” they thought we Photoshopped my wife’s head on to Beyonce’s Body. Some people said that we look hotter than J and Beyonce which was pretty flattering especially since my wife loves Beyonce. People loved the idea and

When we took the picture, we set an iPhone camera up on a table with a timer. My wife sent the original pic to her sitter which she then uploaded to twitter. Someone ended up putting the picture next to the real Jay Z and Beyonce from the on the run tour. It was getting a few thousand re tweets, and then the picture made its way to Tumbler which got almost 50,000 posts.

Then it made its way to Instagram which was getting posted by hundreds of people. A local radio station posted it, countless websites, and many big Instagram accounts. The picture was all over the place. We were pretty surprised that it took off like that.