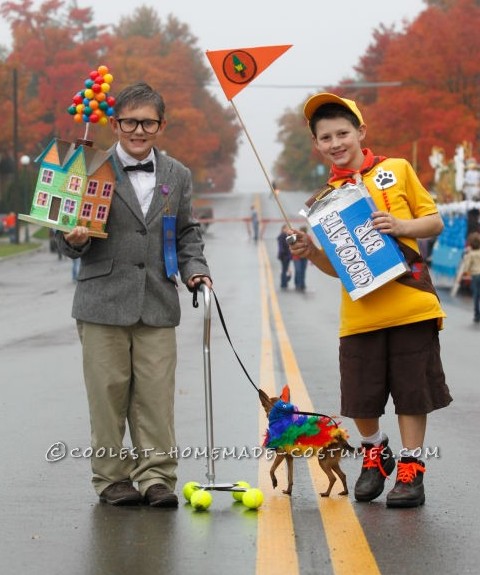 Halloween is this mom’s opportunity to use my creativity. My boys and I always brainstorm early, and this time we came up with these cool homemade costumes for kids: The characters from UP.

Starting with my oldest son, he was Mr. Fredrickson. We shopped at the thrift store for a blazer and dress pants. Bought a simple bow tie and glasses. I just happen to be browsing Hobby Lobby’s clearance and found a grape soda bottle top. My husband drilled 2 holes and pinned it with a safety pin. My friend who is a nurse let us borrow the cane, and we added 4 tennis balls. We sprayed white hair color for his grey hair. Now the house. I found the balloons at the cake store. I think I used 5 or 6 bundles of plastic balloons. I contected them with floral tape. I found the house at Hobby Lobby for 3 bucks. It was just cardbaord, so almost every evening, I spent painting it to look like the house. I cut a good size hole in the roof, and that allowed my son to use the house as his candy bucket.

My other son played Russ. He already had brown shorts and brown boots. I bought a yellow polo shirt, yellow hat (at Hobby Lobby), and neon orange shoe laces. I sewed a sash for him and used boy and girl scout patches. His orange bandana was also from the boy scout uniform. For the flag, I made it out of felt. I took a cereal box, and glued foil all around it to completely cover it, making it look like it was a bit unwrapped in the opening of the cereal box. I added blue wrapping paper, and mod podged it all. I then printed “Chocolate Bar” along with nutrition values on cardstock, and mod podged the printouts on the box. The nutritional value included these:

Our little chichihau was dressed up as the snipe. I bought a white baby bib, and multi-colored feathers from Hobby Lobby, and hot glued them all to the baby bib. I had to alter the opening of the bib to fit our dog’s neck. But before hot-gluing feathers. I took a fluffy sock and cut the toes out and sewed it to the neck of the bib. I added a beak out of felt, and a few feathers on the heal part of the sock which made a perfect hoodie for him. A friend of my boys also dressed up as Dug the dog. He used his water pail as his candy dish. At our hometown Halloween Festival, they received 1st place in the group category. We had much fun putting this all together.