I’ ve always loved dressing up, and Halloween is one of my favorite holidays.  But after I had children, more of my energy went into their costumes than mine. For a few years, I didn’t even dress up at all.  Last year,  I decided to put more of an effort into my own costume and  bought an old used wedding gown on e-bay to be a Day of the Dead bride.  I was thrilled and very surprised to win grand prize at the neighborhood costume contest.  Well, that put the competitive bug in me, and I set out to win  again this year.  By August I was narrowing down my costume choices. I really wanted to keep costs down and decided to recycle the wedding gown.  After much research on the Internet, I decide to go as a post-guillotine Marie Antoinette.  It was ambitious, but I thought I was up for the challenge.

First, I made a duck tape cast of my torso, which I then paper-mached and painted a pale flesh tone.  I stuck an overturned yogurt container in the neck and painted that as well.  I glued bits of sponge for tendons and muscle and an overturned soda bottle cap  for the spinal cord.  I dripped lots of  red food coloring on it to give it that just-severed look.

Next, the dress had to be attached. It was clearly a wedding dress,  and Marie was not a bride at the time of her beheading. The dress was made of cheap polyester and all the info I found online said it would not dye well.  I decided to paint it instead. I got some pale blue fabric paint and painted the front of it.  The color seemed somewhat French revolutionary-ish and took away the bridal aspect.  I glued the dress to the torso and stuffed the long sleeves with poly-fill that I shaped into arms.  I made some “wrists”  from empty toilet paper rolls that I hot-glued to the ends of the sleeves.  I borrowed a pair of white gloves and glued those to the toilet paper rolls.  The arms needed to be in place to cradle my head, so I pinned the hands together. So far so good.

Now it was time to cut the hole where my real head would come out.  I was afraid to do this, knowing that if I made the cut in the wrong place everything could be ruined. It was difficult to hold the torso up and judge exactly where the cut should be.  After putting it on and off many times, I  bit the bullet and made the cut.  Luckily, I had guessed right.

The next hurdle was getting the torso high enough.  I had no experience with this, and my Internet research was only minimally helpful. I wasn’t about to solder: it needed to be simple and lightweight.  After much consideration,  I opted to duck tape the torso to dowels, which I then ducktaped to a backpack.  It worked and felt relatively sturdy.

After putting in all that work and time (four or more weeks by now), I decided I had earned the right to splurge on a wig.  I found one for under $30.00.  The first time I put on the entire costume and walked out into the living room to show my family, the dogs went crazy.  The costume added a good foot and a half to my petite frame. I don’t think they knew it was me in there.

I realized that I could not wear it in the car; it was too tall for me to sit in the seat.  I had to pack it in the trunk and drive to where the contest was being held. I changed in the parking lot.  I wore a long white slip so that my pants wouldn’t show underneath.  Headless Marie was a huge hit at the Halloween contest and earned me first prize.  Everyone wanted to take her picture.  Unfortunately,  she was a bit too realistic for some of the younger kids, who responded much the way my dogs had.   But is was Halloween after all, the one day to lose your head. 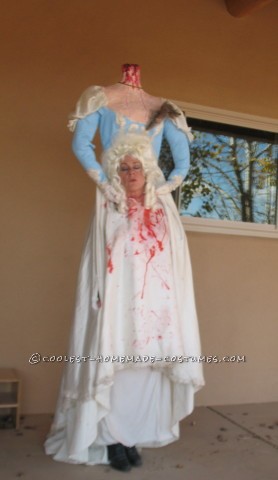 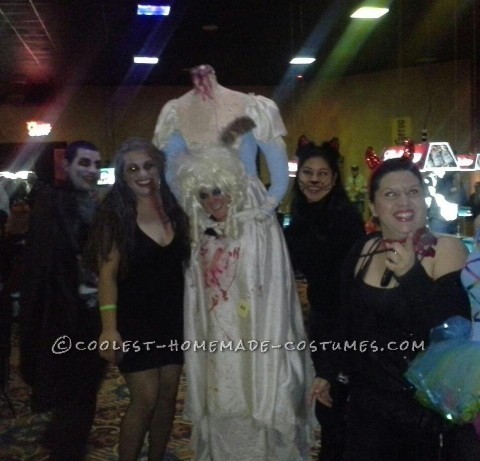 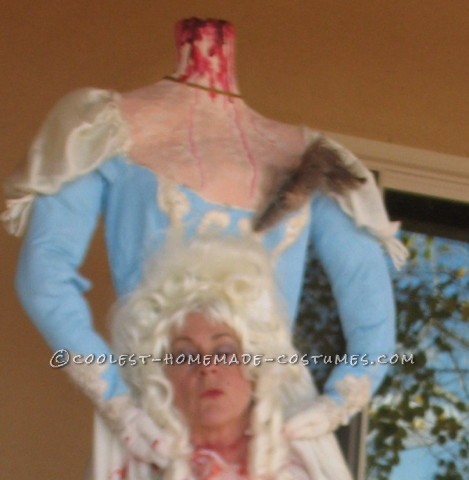