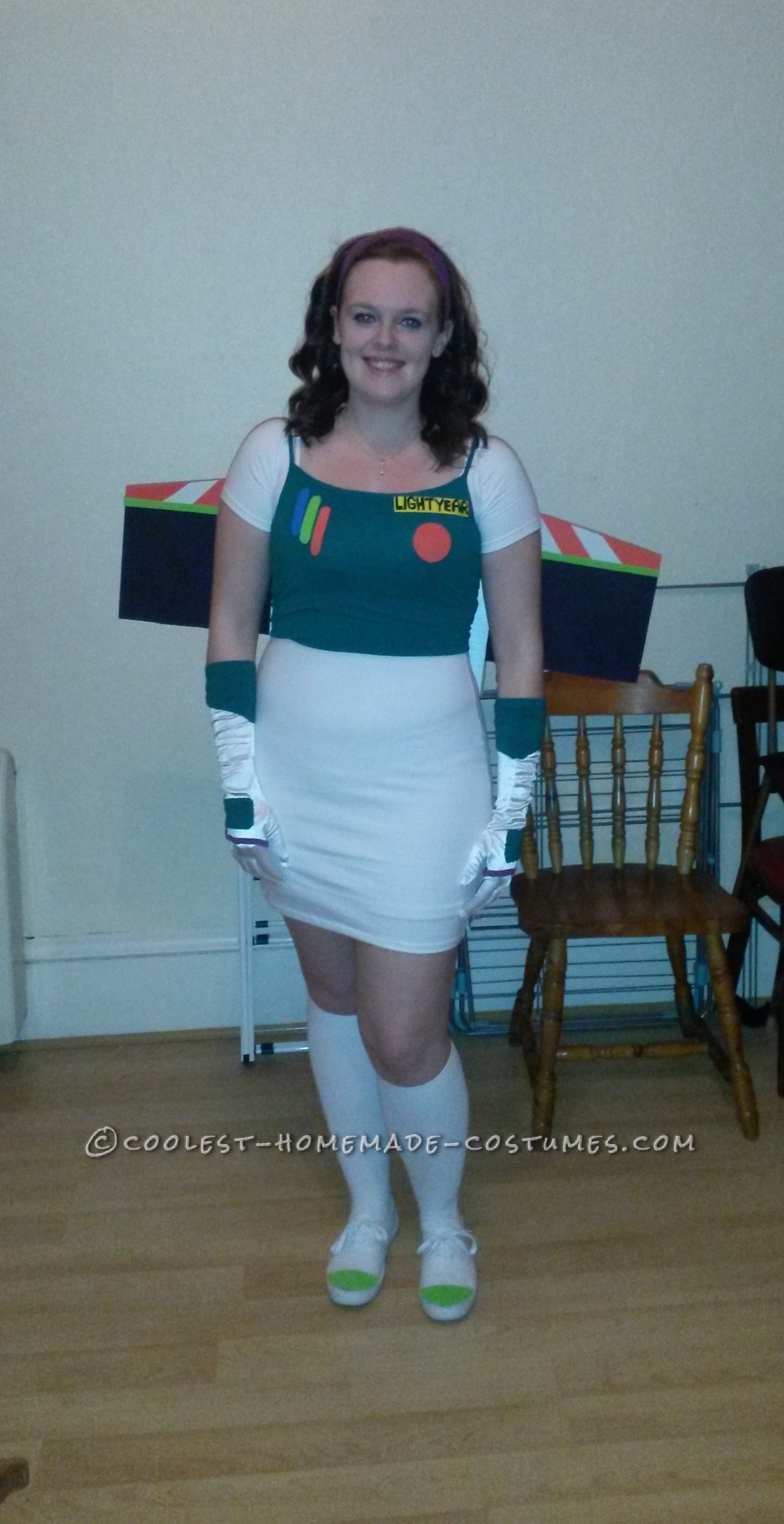 I really enjoy homemade Halloween costumes and this year decided to go with Buzz Lightyear from Toy Story.

For the buttons on the top I used colored foam. Managed to get 20 A5 sheets in 10 colors for £1. Bargain! I just cut out the appropriate buttons in their colors, making my own ‘Lightyear’ name tag also. These were easy enough to then glue on. I had to make sure I glued them on whilst wearing the dress, so the top had stretched out enough (as I’m a girl!). If I had glued these on whilst the top was off, it would be likely the material would stretch under the foam and they would pop off.

For the rest of the clothing I used white elbow length gloves and cut up a purple and a green top. These cost about £6 altogether.

I cut out squares of the green top and sewed these onto the gloves. I also cut out green sections for the top of the gloves. This was a bit difficult as they are angled longer on the inside of the arm and shorter on the outside. I measured out how much I needed and sewed on the longest part onto the glove. I pinned the other, shorter side and folded the material down to form a diagonal line. I then pinned and sewed this on. (As you can see, I dont like to do things the easy way!!) Last part of the gloves involved cutting a strip of the purple material and sew this along the knuckles of the glove. A word of advice, if you can, always try to use a pre-made hem in your sewing as this makes it looks nicer and neater (and saves you hemming!)

I made my own headband. I had a green headband from another outfit and just loosely sewed purple material over it.

The hardest, yet most complimented, part of my costume was the wings! I decided that I needed my wings to move up and down, for that added wow factor. I cut out 2 wings from cardboard and cut out two squares from cardboard for the jetpack. One of these squares was longer by 3cm so I could fold this over and sellotape it to the other square. The wings will be fastened inside this. I also had to have another piece of cardboard that could be folded and sellotaped at the bottom of the square. This cant be the full width of the square or the wings will not drop down, but without it, the jetpack will not stay rigid and the wings will hit each other when they are down. (very complicated!)

I painted the jetpack white and used the colored foam for the detailing on the jetpack. I decided to do the wings the hard way. It would be much easier to just paint the whole thing but since I had so much foam I did it the long way. I drew out the slanted white and red lines along the top of the wings on both sides. I painted the bottom in purple paint. The purple came out a lot darker than I had wanted though. I then spent ages individually cutting out red and white alternating stripes and glued these on. Painting the red and white stripes would be much easier but the 3D effect of the foam made it look more real!

Once everything was dry and glued on I contacted my dad for a bit of advice on how to make the wings move. He suggested those paper fasteners that you push through paper and open up on the other side. This worked perfectly as this would allow rotation. I measured out exactly how far in and down I wanted the wings to hang and fastened it together. The wings were fastened to the cardboard square that was on the inside (at my back). This allows the wings to naturally hang down. To pull them up, I simply tied string to the end of the wing, pushed it through a hole at the top of the jetpack and this hung down behind my back. When you pull the string, the wings pop up. I just wrapped the string around another fastener and they stayed up.

Last but not least, I cut out foam green semi circles for my plimsolls and stuck these on. Put on knee high white socks and wrote Andy on the bottom of my right shoe!

This costume was a really big hit as nobody had seen a female Buzz before and the wings moving up and down got a huge reaction in the club and on the street! 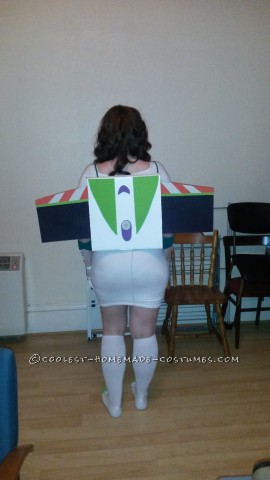 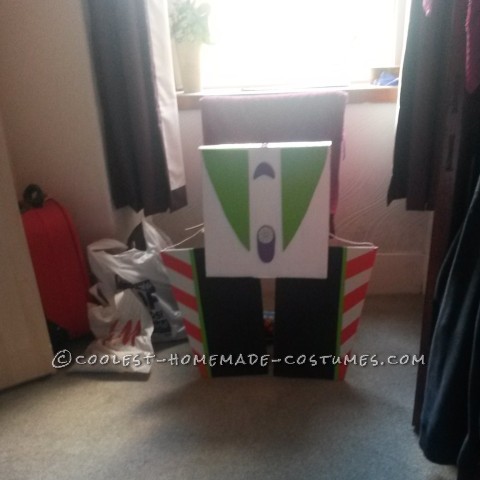