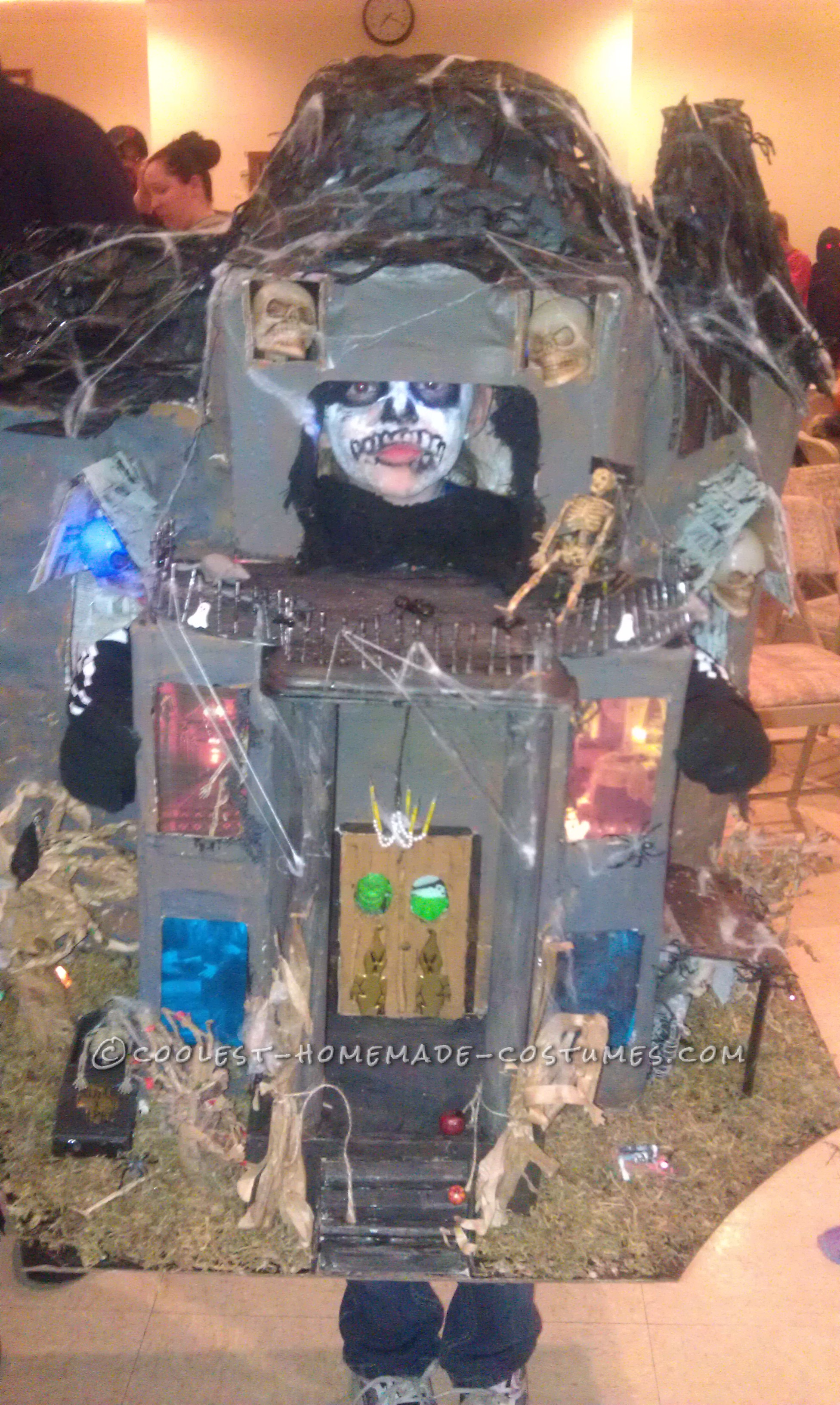 Lilly wanted to be a Haunted House. We had an awesome time creating it. With the trial and error of boxes, cardboard, chicken wire, paper mache, and many other props we finally had a great finished costume. We put a lot of detail into it. Using the boxes, chicken wire and paper mache’, we created the perfect shape so Lilly could fit in easily.  She wore a life jacket to help support the weight and tied the costume to the straps of the life jacket so she could move around easily without it wobbling on her.

The house itself was put on the cardboard base and used the chicken wire to attach the two pieces. It worked perfectly. When the paper mache’ was all dry, we painted the entire house and added spider webs and spiders. As for the details on it, we used rivits and wire to make the railing around the top porch where the rocking chair was made out of straws from juice boxes and painted black. We placed a skeleton in the chair.

The trees were made out of paper bags, we colored coffee filters with fall colors with magic markers and dripped with water then cut out leaves and glued on the trees. We used craft moss to put around for grass using spray glue to hold it down. The windows all had battery tea lights in them to light up the inside of the windows. Some windows had pictures of inside haunted mansion rooms we printed and put inside the windows to make it look like a real house. Some had skeletons and one window had a picture we cut from a Halloween picture that had two people that looked to move and change when looking at from different angles.

The chandelier over the front door was made with wire strung with small beads and juice box straws and used hot glue to hold it up. A flickering strobe battery operated light was glued up also for lighting effects. We used colored CD cases and glued them to the inside of windows to make them look more realistic. We had battery operated skeleton lights strung through reaching some of the windows that also played scary music and a set of small lights that were hooked up on the side door side with the on/off switch inside the house sat in a cut off band aid box that was the perfect size to glue to the inside behind where her arm came out.

The flashing lights and music were awesome. A battery operated small black light was glued up inside the ‘head box’. When we put the glow in the dark make up on her face, the black light lit up her face and made her look very cool.

Everyone loved her costume. We love being original. The idea all started with my 6 year old granddaughter wanting to be a haunted house. It was easy for her to get around for as big as it was. It took a couple weeks to get it all together but was so much fun and everyone at the local Halloween party in our town loved it.  So many people were taking pictures and asking how we did it.  She won first prize at the party (a bag of candy and a first place ribbon).  When trick or treating with it on, she was easily seen at night with the flashing lights and music. Her only complaint was that everyone was stopping and admiring her costume so much and looking over all the detail and she was missing out on getting to more houses for candy. 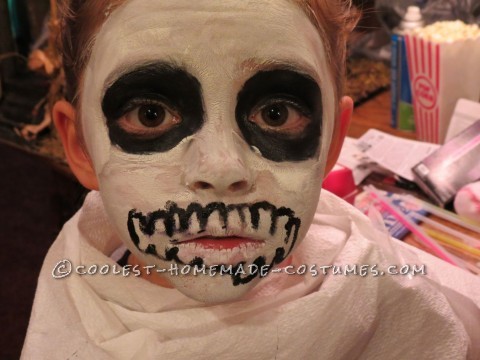 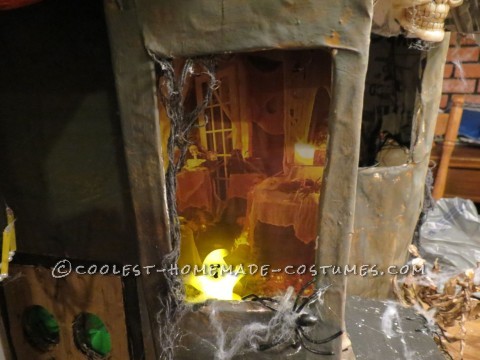 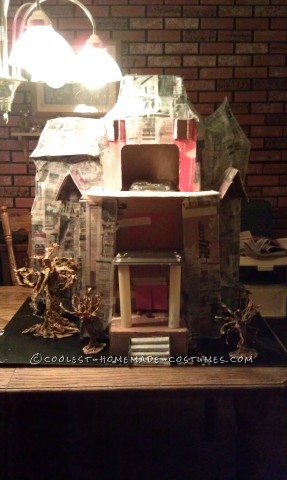 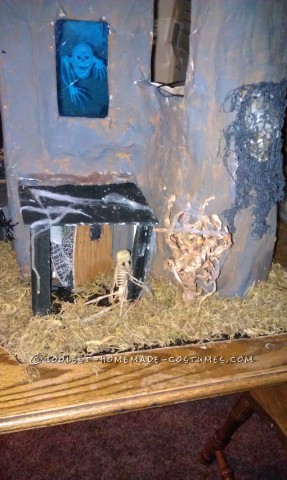 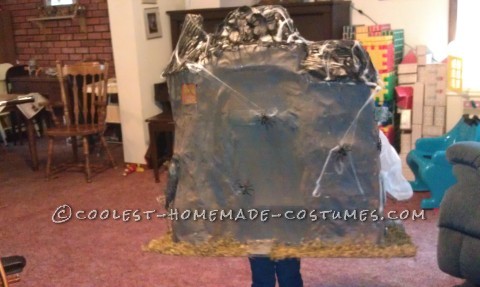 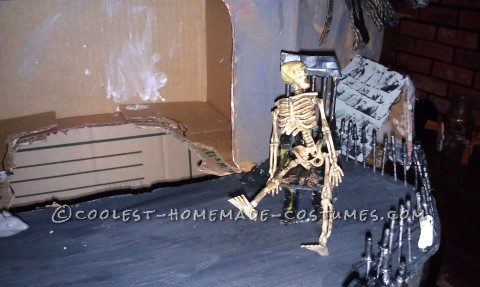 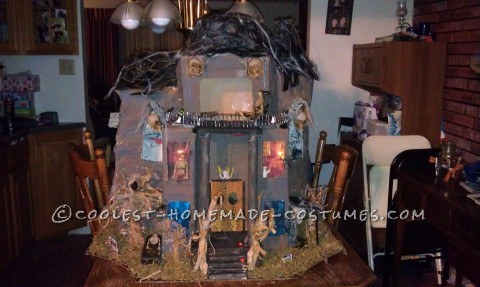 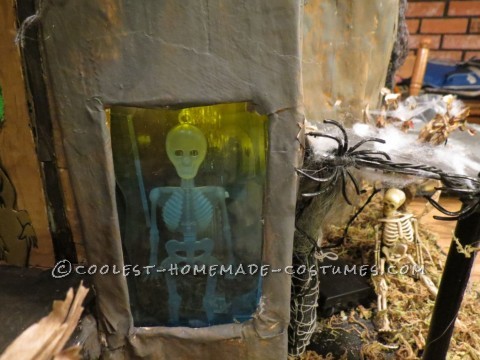 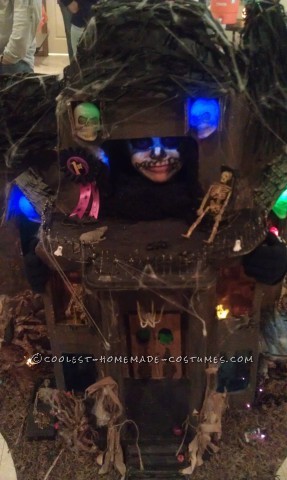